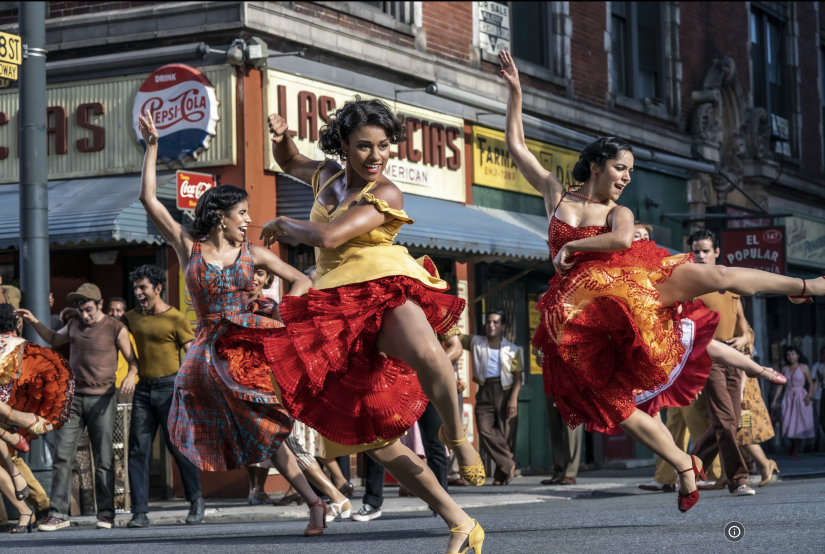 Ariana DeBose, Ana Isabelle and Ilda Mason make a compelling case for watching the new “West Side Story,” made in 2021 by Steven Spielberg, with new choreography by Justin Peck. Photo from IMDB

If you love musical theater or want to introduce it to your kids or grandkids, here are three landmark shows that can be streamed.

Rodgers and Hammerstein reinvented the musical in 1943 with “Oklahoma,” the first show to integrate the book — and a rather dark one — with the songs.

The 1955 film stars Gordon MacRae as Curly, a cowboy whose romance with a farm girl, Laurey (Shirley Jones), is violently interrupted by a disturbed farmhand, Jud (Rod Steiger).

Rodgers and Hammerstein oversaw the film, and few changes were made from the stage version. This was almost certainly a bad thing. What works on the stage can look oddly unnatural on the screen. Fred Zinnemann’s hands were tied and he never directed another musical.

There is also a 1999 film of the Royal National Theatre production directed by Trevor Nunn and choreographed by Susan Stroman. Watch this one if you can find it; it’s grittier and Hugh Jackman as Curly is a better actor than MacCrae.

While this book doesn’t match the brilliant plots of the other shows covered here, the songs are pure joy and all probably embedded in your mind. My favorite is “The Surrey with the Fringe on Top.” Ask YouTube or Spotify to play the covers by Jackman or Mel Torme. Stream on Disney, rent on Amazon and others.

It’s hard to think of a musical more inventive and ambitious than “Cabaret,” which opened on Broadway in 1966, about a singing star in a Berlin club during the beginnings of anti-Semitism and Nazism in 1931. The book is by Joe Masteroff (who also wrote the musical “She Loves Me”) with songs by John Kander and Fred Ebb.

Bob Fosse directed the 1972 film, and many changes were made from the stage version, all to the film’s benefit. The side romance between Fraulein Schneider and Herr Schultz was dropped, and Kander and Ebb added new songs including “Money Money” and “Maybe This Time.”

Although many talented actresses have played Sally Bowles, it’s hard to think of anyone in this role except Liza Minnelli, who won an Academy Award, as did Joel Grey as the master of ceremonies. The movie won eight Oscars but missed Best Picture; it was the year of “The Godfather.”

If you have only seen stage versions of “Cabaret,” this very different film offers an enjoyable surprise. Stream on HBO Max, rent on Amazon, Apple, others.

At age 25, Stephen Sondheim saw himself as a composer and did not want to write lyrics for this show. He was encouraged by his mentor, Oscar Hammerstein, who said, “You’ll learn something.”

And so Sondheim got together with composer Leonard Bernstein. They wrote “Something’s Coming” in one day in Bernstein’s apartment. Both were baseball fans: “Catch the moon, one-handed catch.” When the show opened on Broadway in 1957, their reimagining of Romeo and Juliet on the streets of Manhattan became an instant landmark musical.

The 1961 movie, directed by Robert Wise and Jerome Robbins, won many awards, but it might be hard to watch today, with a miscast Natalie Wood, the Sharks in brown-face, and most songs dubbed by ghost singers.

You should watch the 2021 film, in which Steven Spielberg and Tony Kushner update this classic in spectacular fashion. Rachel Zegler made her film debut as Maria; she won the role at age 16 in an open casting call. She looks lovely and has a thrilling voice. Ariana DeBose won an Oscar for her role as Anita.

The dance numbers are stunning and more realistic and suitable to the action than the choreography in the stage versions. In short, a great play renewed as a great movie. Stream on HBO Max.