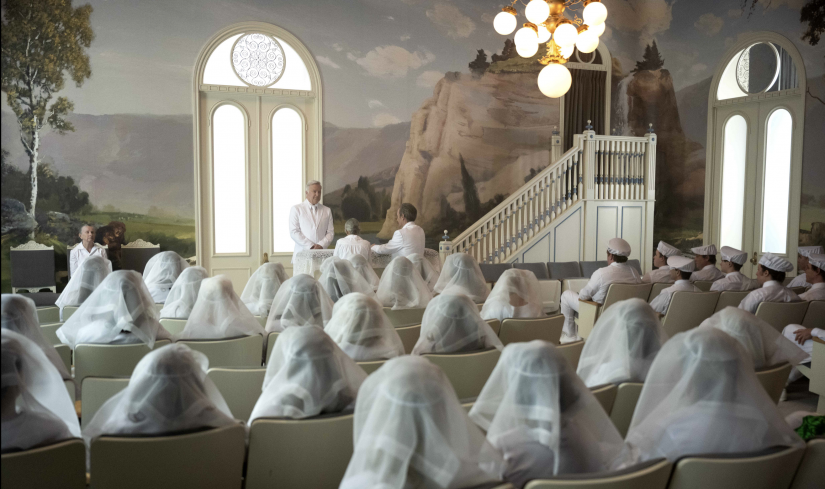 An adaptation of Jon Krakauer’s 2003 book, “Under the Banner of Heaven,” on Hulu, uses the murder of a woman and her daughter as a means to examine the Church of Jesus Christ of Latter-day Saints. Photo from IMDB

In 1984, Brenda Lafferty, a member of the Church of Jesus Christ of Latter-day Saints (LDS) in American Fork, Utah, and her 15-month-old daughter, Erica, were brutally murdered with a 10-inch boning knife. Her husband, Allen Lafferty, found their bodies and reported the crime to the police.

Author Jon Krakauer wrote about the murder in his 2003 nonfiction book, “Under the Banner of Heaven.”

Krakauer begins with an examination of the Lafferty family, who are like “the Kennedys of Utah.” The facade of their perfect Mormon family radically unravels as the narrative progresses.

The shift starts with pushback against tax laws and grows to the point where the Lafferty brothers create their own laws, using Mormon fundamental beliefs to buttress their actions.

They carry out and justify the murder of the mother and daughter as blood atonement — the fundamentalist belief calling for the murder of a sinner.

Hulu adapted Krakauer’s novel into a television series of the same name, which was released April 28. The show’s writer, Dustin Lance Black, grew up in the Church of Jesus Christ of Latter-day Saints. About three decades ago, he left the faith and came out as gay, a courageous decision to make in a community that is known for homophobia.

Black (who also wrote the Oscar-winning film “Milk”) introduces a fictional character to the story: Jeb Pyre, a devout LDS member and the lead policeman investigating the small-town double murder.

Krakauer uses the deaths of mother and daughter as a portal to an examination of the culture of Mormonism and the Church of Jesus Christ of Latter-day Saints.

In this new filmed version, Pyre (played by Andrew Garfield) pieces through the mystery and uncovers hidden hypocrisies in the religion and community he grew up in. He struggles to keep his faith, and to find justice for Brenda and Erica at the same time.

At the beginning of the series, Pyre is fully devout, calling other members of his church “brother” and “sister” with a gentle tone and praying with his daughters, wife and mother. The opening scene shows him outside on his carefully tended front lawn, playing with his two daughters outside a suburban house glowing in the early evening light.

The Mormon faith is complex, and controls its members even to the foods they eat. Coffee, alcohol and chocolate are considered unhealthy, and are forbidden. To eat at McDonald’s verges on committing a sin.

Pyre’s morality and devotion seem unbreakable — but with a goofy smile he bashfully accepts a French fry from his atheist police partner, Bill Taba (played by Gil Birmingham, star of the popular show “Yellowstone”).

Pyre and Taba begin their investigation of the murder with Allen Lafferty, who shares details of Mormon history and memories of his apparently picture-perfect family. But the dark edges of the family’s life begin to show as Lafferty reveals the deep sexism that forms the foundation of a religion in which equality between sexes is impossible because of the stringent patriarchal system.

Allen reveals that his wife disapproved of some accepted behavior in their community, ranging from sexism to polygamy and incest. She had been encouraged in these beliefs by her father, James Wright, a Mormon bishop with a more modern belief system.

In one scene, Wright pushes a bar of chocolate toward his son-in-law. Lafferty initially rejects it, trained by his religion to be disgusted by it … but then he takes a bite, and agrees it is delicious.

But there are more factors at play with Lafferty’s rigid observance of Mormon rules. And like other characters who struggle with battling extremes in the religion, it’s tremendously trying for him to take a lesson in chocolate as a reason to step back from his brothers’ rambling, traditionalist motives.

“Under the Banner of Heaven” is captivating because of the way it shows how religion can be a dangerous fuel for men seeking power and control.

The murder of Brenda and Erica Lafferty is shown as a form of madness and extremism, in a religion with highly complex and stringent rules. Not all Mormons are murdering fanatics; but Krakauer’s book and this new series on Hulu hint at a culture with a disturbing history.

“Under the Banner of Heaven” is available on Hulu.