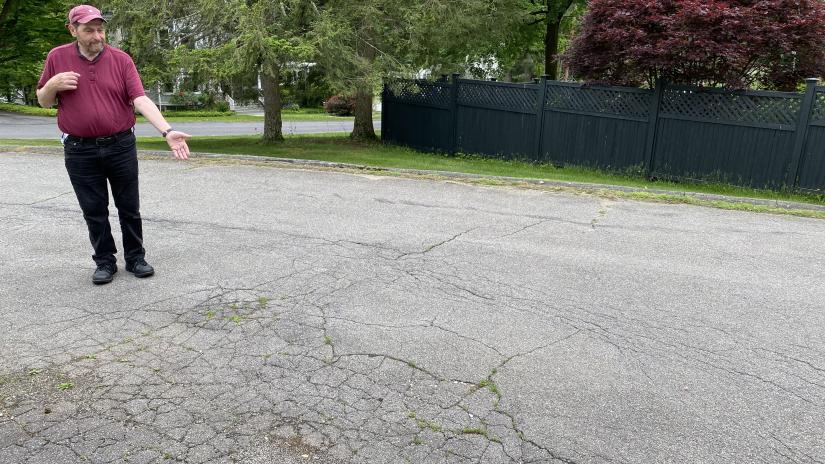 Varoujan Froundjian has made an experimental film featuring the random patterns he sees, like cloud shapes, in the streets and sidewalks of Lakeville, Conn. Photo by Cynthia Hochswender

The Pavement as You’ve Never Seen it Before

Once childhood and childish games of hopscotch and “don’t step on the crack” are a thing of the past, most of us stop looking down as we walk. Certainly there are many reasons to hold one’s head up: The sky, the trees, the interesting architectural details, here and in Manhattan.

But if you’re walking every day, for 20 minutes or so on each outing, pretty soon you start looking for new ways to occupy your mind.

Varoujan Froundjian moved to Lakeville, Conn., five years ago after retiring from a career as a computer graphics designer for New York City publishing companies. But as he was preparing to enjoy a well-earned rest, life threw a curve ball: He was diagnosed with leukemia and had to undergo a painful bone marrow transplant.

It took more than a year for him to recover, and part of his rehab regimen was to take a walk every day for 20 minutes or so. And as he walked, he began to see patterns and images in cracks in the pavement.

“My doctor would have preferred to have me walk with my head up,” Froundjian confessed. “But I became fascinated by these images and started to take photos and then videos as I walked.”

Rather than regret the years he lost to corporate America, he sees a silver lining: “That profession gave me all the tools I needed, like Photoshop and Adobe After Effects. These have become my main way of expressing myself.

“I can import a photo, change it, retouch it, change the format, and I incorporate all that in my movies.”

Froundjian’s interest in film became entwined with his daily walks and with the pavement patterns that he spent so much time studying every day. They began to take on symbolic and allegorical importance to him. And since he had his iPhone with him (as we all do these days), he began to capture images of what he was seeing.

“That’s the beauty of this modern technology,” he said. “You don’t need expensive movie cameras and other equipment. The iPhone is so sophisticated, the images are crystal clear and you can upload it all to your computer. Adobe After Effects lets me assemble all the little pieces. I can draw images and add them and add special effects, filters, music.”

The film that grew from his daily walks doesn’t have music, however, or any narration.

“At first I was thinking of doing a voice over or narration but then I thought it’s not necessary, especially in an experimental,non-narrative non-character non-story film. There’s no story: The viewers watching these images create their own impression, their own stories.”

The only soundtrack is the pulse-like pounding of his feet on the ground as he walks.

Froundjian submitted his 10-minute film, “Pulses of the Pavements,” to some experimental film festivals — and won top honors in several of them.

Perhaps the best prize of all, though, was the uplift his film work brought to his medical checkups.

“When I went to visit my doctor, I had two things to be happy about: I was making a movie; and my heartbeat, breathing and blood pressure were on track, and I was regaining muscle from all my walking.”

To see the sidewalks and streets of Lakeville and New York City as you’ve never seen them before, go to YouTube.