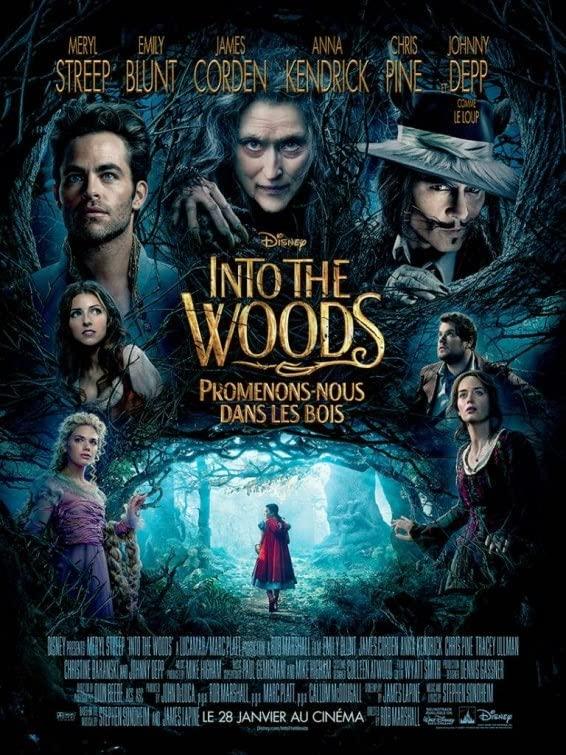 Stephen Sondheim died last week at age 91. He transformed the American musical. Ranking his musicals seems futile; they are all so different and almost all so good. Some of his best-known work, such as “Follies” and “Company,” is poorly suited for film adaptation, but two of his finest shows have had successful movie versions.

I saw the acclaimed 2019 Barrington Stage production of this much-loved show and came away thinking it doesn’t get any better than this. So I approached the film warily. But I doubt even the most fervent Sondheim worshippers will complain much about this spectacular 2014 Disney production, directed by Rob Marshall and starring Meryl Streep.

Sondheim and James Lapine have conjured up a captivating look at several fairy tales — Cinderella, Jack and the Beanstalk, Little Red Riding Hood — and intertwined them with a tale of their own.

A baker (James Corden) and his wife (Emily Blunt) are sent on a quest by a witch (Streep) to find the following items in order to have a baby: “A cow white as milk, cape red as blood, hair yellow as corn, and slipper pure as gold.”

During their adventures in the woods they encounter classic characters including Cinderella (Anna Kendrick), her evil stepmother (Christine Baranski) and the big bad wolf (Johnny Depp).

The first act (or 1:15 into the film) ends with the success of their quest and everyone perhaps living happily ever after.

Something quite different happens in the second act (final 45 minutes). The story moves away from fairy tales and begins to resemble the way we live now; that is to say, it gets a lot darker. Some will survive; some won’t.

The finale rewards us with a hopeful ending, two of Sondheim’s loveliest songs — “Children Will Listen” and “No One Is Alone” — and perhaps a few tears.

If you would like to step up from the usual holiday movies, gather the family and watch this wonderful show. Stream on Disney, rent on Amazon.

The Demon Barber of Fleet Street is definitely not a family show — unless you are the Addams Family. I saw the stage version during a 1989 revival at Circle In The Square, which was like having a front row seat at a slaughterhouse.

Tim Burton (“Edward Scissorhands,” “Batman”) directed the 2007 DreamWorks film and was the perfect man for the job. Johnny Depp was cast as Todd, not an obvious choice — Jack Nicholson must have been tied up (“Here’s Sweeney!”) — but Depp gave a fine performance that won him a Golden Globe and an Oscar.  Helena Bonham Carter plays Mrs. Lovett, and Sacha Baron Cohen makes a brief but splashy appearance.

Many of you will recall the plot. Todd returns to London after a false imprisonment, obsessed with avenging the judge who sent him away and took custody of his lovely daughter, Johanna. He gets his revenge but not before entering into a scheme to provide meat for Mrs. Lovett’s pies. Much slaughter ensues. The conclusion is a shocking stew of intrigue, retribution and carnage, with some relief being provided by the romance between a young sailor and Johanna.

The thrilling Sondheim score holds this dark melodrama together. Some songs may be familiar — “Pretty Women” and “Johanna” — but, as in all of his shows, the action does not pause for songs; they move the story along, like dialogue or opera. The director of the Metropolitan Opera reportedly was willing to stage “Sweeney” at the Met.

Turn up the brightness on your TV and stream it on Hulu or rent on Amazon.