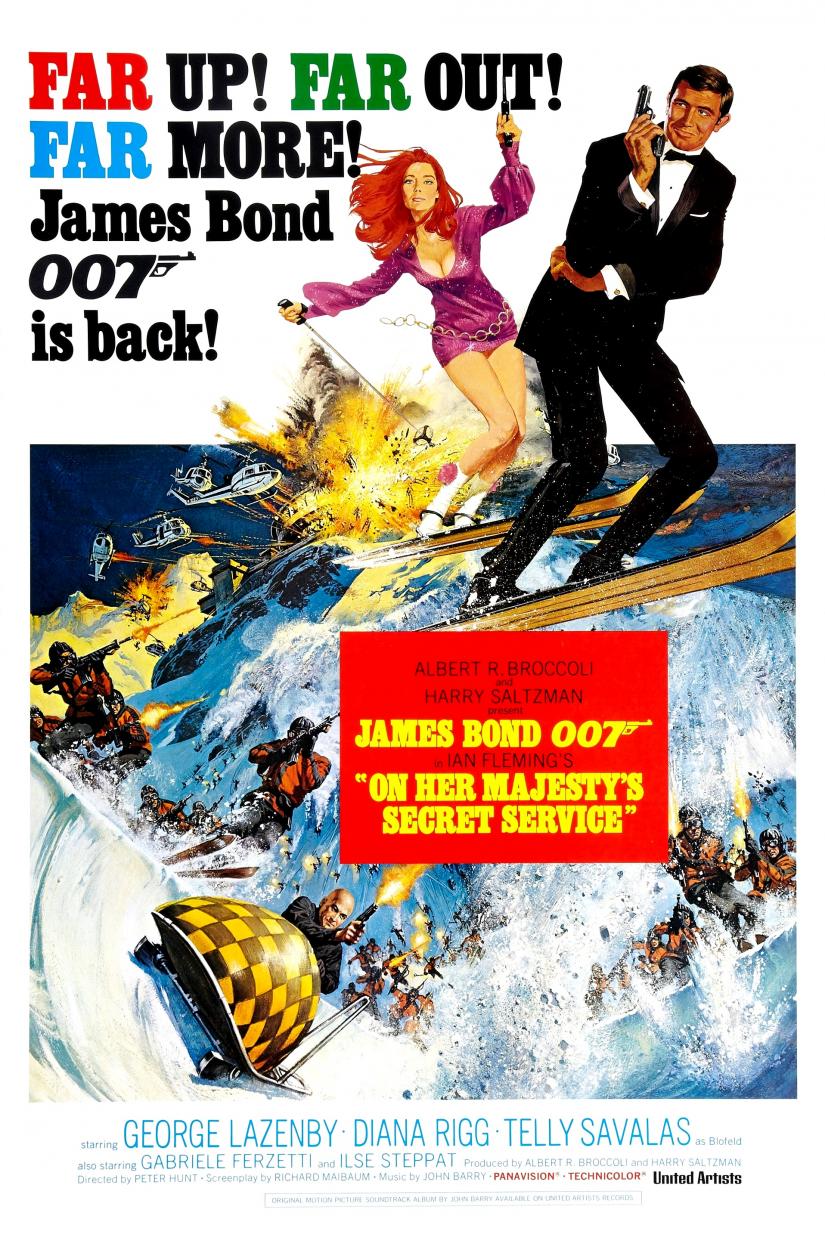 Boondocks Film Society will show the 1969 James Bond film “On Her Majesty’s Secret Service,” starring George Lazenby as Bond and Diana Rigg as the Bond Girl who becomes his wife, on Jan. 30.

An Evening of Bond, Blofeld and Bouffant Hairdos

Most readers of this newspaper are sufficiently seasoned that they have chosen a favorite James  Bond — either Roger Moore or Sean Connery. Perhaps some younger readers might throw in a vote for Daniel Craig or Pierce Brosnan.

But it’s entirely possible that our youngest generations might ask innocently, “Who is James Bond?”After all, it’s been five years since the most recent film in the franchise (the relatively forgettable “Spectre,” in 2015; a new entry, “No Time To Die,” might be out as soon as April of this year).

Don’t scorn those youngsters; envy them. After all, they get to discover the James Bond films and books with new eyes; it’s like being a teenager and discovering that there was a band called The Beatles, and having the chance to hear their songs for the first time. How fresh! How thrilling!

Taking stock of all the Bonds

Anyone who would like to begin Bond Binging can find many of the films on streaming services such as Amazon Prime and Hulu. The first of the films, and a good place to begin, is “Dr. No,” which introduced the suave spy to moviegoers and also introduced young Sean Connery in the lead role.

From there you could continue on sequentially but you’ll have to make an important decision at several junctures, and that decision will involve whether you watch some of the minor, one-shot Bonds or only stick with the main canon.

In other words, do you skip David Niven in “Casino Royale,” which was a parody and not an actual spy thriller (but which has theme music by Herb Alpert and the Tijuana Brass)? Do you watch the two Timothy Dalton entries (“License to Kill” and “The Living Daylights,” which had Maryam D’Abo and her cello as the somewhat ridiculous love interest)?

And then of course … there is the 1969 George Lazenby single entry into the world of Bond: “On Her Majesty’s Secret Service.”

Even many ardent Bond fans have never seen this one — or haven’t seen it since it aired occasionally on network television back in the 1970s.

But this film has a lot to offer in this day and age.

For one thing, its plot centers around Ernst Blofeld’s efforts to destroy England’s agricultural economy through germ warfare.

This is one of the few Bond films that is actually based on an Ian Fleming novel; it’s the second in the “Blofeld Trilogy,” which began with “Thunderball” and ended with “You Only Live Twice” — although Blofeld and his white cat appeared onscreen many more than three times. He was played by actors including Donald Pleasance, Charles Gray, Max von Sydow, Christoph Waltz (most recently) and was parodied by Mike Myers in the Austin Powers films.

If you like the Austin Powers films, it’s a safe bet to say you’ll like the outrageous grooviness of this particular Bond film. Bond wears ruffled shirts and, at one point, a kilt. There are shaggy flokati rugs. There are bosomy girls with bouffant hairdos.

If you’re a fan of 1970s kitsch you’ll also get a chance to see an icon from that era, Telly Savalas, playing the bald Blofeld.

And yet, it’s pretty elegant

Unlike many of the other Bond films, which got frankly a little tacky and a little wacky, “On Her Majesty’s Secret Service” is still a relatively elegant and understated production.

The Bond Girl is Diana Rigg, famous not only for her catsuit in “The Avengers” but also, many years later, for her plummy intros to British television programs on PBS and a turn on “Game of Thrones.”

Bond in this film (and the novel) is a more fully sketched out character, who mourns a lost love (Vesper Lynd) and then eventually marries Rigg (although she is shot to death shortly after the wedding, at the end of the film; Bond must always be a free agent).

Elegance aside, there is still plenty of shooting and skiing and gadgets and discreet sex.

In other words, on a cold quarantine winter you could find worse things to do than enjoy this film.

Where to see it? Conveniently, Boondocks Film Society (based in West Cornwall, Conn.) resurfaces this month with its first film screening in many months. The film is: “On Her Majesty’s Secret Service.”

Boondocks organizer Jeff Palfini has chosen the Four Brothers Drive-In in Amenia, N.Y., as the site for the screening. Traditionally, Palfini tries to find a venue that in some way reflects the movie plot, but in this COVID-19 winter, the drive-in is one of only a few screening options available.

“On Her Majesty’s Secret Service” will be shown on Saturday, Jan. 30, at 6:30 p.m. The drive-in will open at 6 p.m., not only so you can get there early and get a choice parking spot but also so you can sample the themed foods and craft cocktails that always accompany a Boondocks screening.

The menu hasn’t been announced yet but, since this film is set in Switzerland, perhaps it will include fondue and chocolate. You can either have food delivered to your car or truck, car-hop style; or you can pick up food at the Four Brothers restaurant.

As for heat on a cool evening, you have the option of course of keeping  your engine running during the film, but most groups will find that they only need to restart a few times during the showing. There is also expected to be an intermission.

Tickets are $14 for person in each vehicle and should be ordered in advance. To find out more and to get the ticket link, go to https://boondocksfilmsociety.org/now-showing.