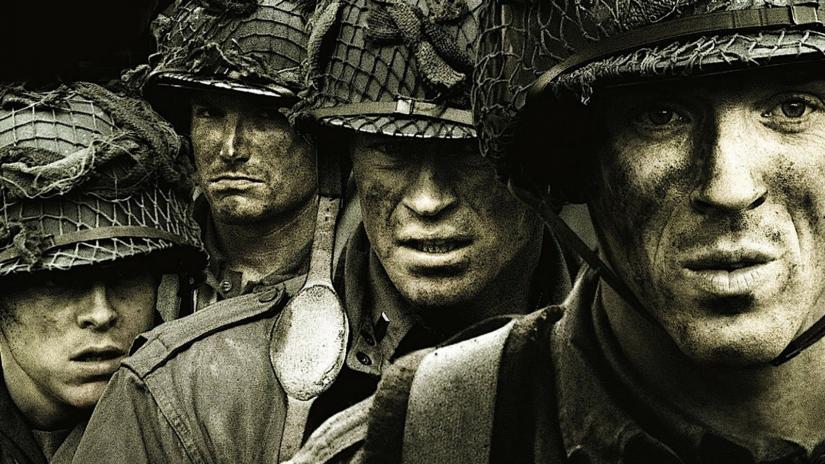 Damien Lewis, at far right, was one of the young stars of “Band of Brothers.” Photo from IMDB

Band of Brothers, Generation Kill: Thank You for Your Service

If I asked you to name some great war movies, you could likely rattle off a half dozen without much thinking. But TV does not dramatize war very often or very well. We do have Ken Burns’ fine documentary “The Vietnam War,” but I can think of only two miniseries worth mentioning here; each depicts a very different war.

You have certainly heard of and possibly seen this classic, which many consider the best miniseries of any kind. Let me remind you what makes it great and urge you make time to watch it for the first time or again.

The story: Based on Stephen Ambrose’s book of the same name, this 10-episode HBO show follows Easy Company of the 101st Airborne Division from jump training to the Normandy invasion to the Battle of the Bulge and to the liberation of Dachau.

The cast: Winner of an Emmy for outstanding casting, the main cast includes David Schwimmer as Captain Herbert Sobel, the flawed leader of Easy during training and Damian Lewis as Dick Winters, the company commander who leads them in combat.

The production: Led by co-producers Tom Hanks and Steven Spielberg, the production is nothing short of astonishing (at a cost of $125 million).

There are few more thrilling TV moments than the early episodes showing close to 100 C-47s taking off from England heading to Normandy, and then the night sky filled with flak and descending parachutes. This is a sight unlikely to be seen again; airborne troops are now delivered by helicopters rather than jumping from planes.

In March 2003, the U.S. launched a pre-emptive invasion of Iraq, beginning a war based on misinformation and lies. This in no way diminishes the courage and service of the men and women who fought in it.

Their story was told in a 2008 HBO miniseries about an elite Marine recon company heading north in the desert in their lightly protected Humvees, a trip marked by confusion and firefights.

In the final devastating episode they roll into Baghdad and are ordered to stand aside while civil conflict begins. Their interpreter says, “You took this country apart and you can’t put it back together.”

Generation Kill is notable for its authenticity and its dialogue, which is jumpy, profane, and laced with black humor. It was written by David Simon, creator and head writer of “The Wire.” Marines love this show and say it’s 80% on the mark.

Both shows are based on actual events and are honest in balancing heroism with the terror and violence of battle.

When you watch these shows together, as I did, you see the difference in production and tone, but the similarities are more striking. The weapons may have changed somewhat, but one firefight looks very much like another, and for “boots on the ground,” all wars must seem the same.

The most basic tenet of military training is to obey orders without hesitation or question. When it comes to war we are still back in the 19th century: “Theirs not to reason why, theirs but to do and die.” But when we look away from the screen, we cannot help asking why.

Then we think of the enormous difference in the mission and the outcome of these two wars and the leaders who sent soldiers into battle: Roosevelt and Churchill and Bush, Cheney and Rumsfeld.