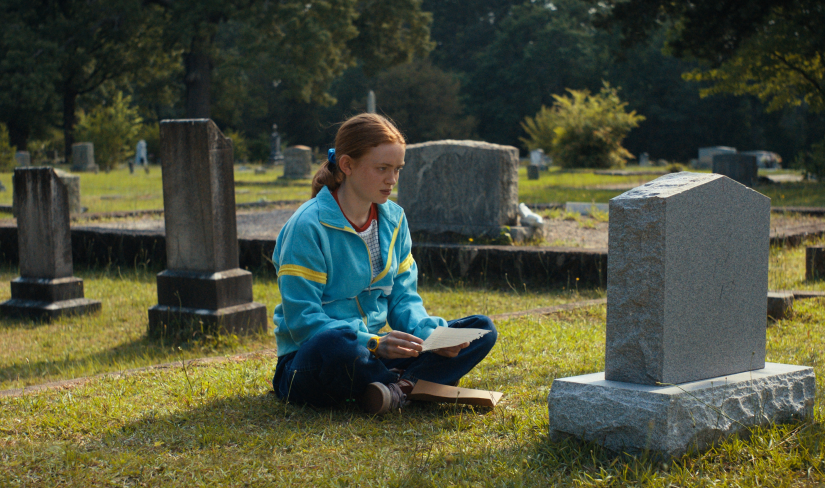 Three horrified kids cower in a graveyard, as their redheaded friend is jolted upward in the air, ragged with terror.

This is a scene from the fourth season of the Netflix production “Stranger Things.” The teen horror hit is the number one English-language program on Netflix. Each episode averaged $30 million to produce. And it’s had a radical impact on the public; for instance, its emphasis on Dungeons & Dragons (D&D) has contributed to the board game’s newly popular presence.

“Stranger Things” started with four best friends fighting otherworldly horrors in their small-town home of Hawkins, Ind., in the 1970s. Now, the group of youngsters has grown to a team of 13, navigating the ’80s and battling the same sci-fi freaks — specifically, the supernatural foes originate from the Upside Down, a twisted parallel world.

In the season three finale, Max (the floating redhead mentioned above) witnessed her half-brother, Billy, die in a fight scene.

In season four, Max and her pals are freshmen, rattled from their past in the Upside Down and nervous about confronting the banal trials of high school.

It is Max who suffers the most. She plugs herself into headphones, isolates herself from her friends, and settles into headaches and nightmares that keep her from being able to come to grips with Billy’s death.

When teens in Hawkins suddenly start having visions of trauma and are then possessed by uncanny forces that hang them in the air, with their limbs at impossible angles, Max knows she’s next.

Working to stop the scourge, Max’s friends discover a solution. Music, they learn, reaches parts of the brain that words alone can not.

Like D&D, the series has made a new hit of Bush’s song. Although a cult favorite in its day, it never topped number 30 on the Billboard Hot 100. After it was featured on “Stranger Things,” the song returned to the Billboard charts at number 8, and was number 1 on the iTunes chart, thanks to the show’s huge audience.

The song also reflects the show’s focus on true loyalty. Bush sings, “If I only could, I’d make a deal with God, and I’d get him to swap our places.” This group of friends risks life and loss for each other.

Perhaps part of the reason for this series’ enormous popularity is that the plot builds allusions to other beloved works of science fiction.

As teens battle grotesque creatures that even grownups in lab coats can’t destroy, there are references to “The Lord of the Rings” and multiple Stephen King classics, like “Carrie” and “It.”

There might even be a nod to the Neal Stephenson novel “Snow Crash.” One of the “Stranger Things” friends, Argyle, works at Surfer Boy Pizza, which delivers fresh pies in a strict 30 minutes. Stephenson’s hero does the same; it’s how the action in the novel starts.

Besides calling to triumphs of science fiction, the season is winning in other places.

There’s a new character, Eddie, proving to be popular because of his bad-boy cover. Underneath, he cradles a sensitive love for guitar music.

Steve and Nancy’s recent flirtation is also stirring the “Stranger Things” fanbase. It’s hinting at a provocative love triangle between the two and another teen, Jonathan.

Besides the graveyard with Max’s stint in floating possession, there are other creative scenes in the recent season making it an engrossing watch. The characters’ adventures take place in the haunted Creel family home, the hideout lake shack, and Russia.

Will’s interest in painting is also far from a slight hobby. His rolled-up painting that he carries through episodes is frustratingly mysterious — until the conclusion of the show.

And speaking of the conclusion, there’s more in store. Brothers Matt and Ross Duffer, who created “Stranger Things,” are expanding the universe. The seven episodes of season four, volume one, clock in at 9 hours and 7 minutes.

And volume two, which was released on July 1, has one episode (number 9) that lasts two hours and 30 minutes.

“Stranger Things” is available on Netflix.