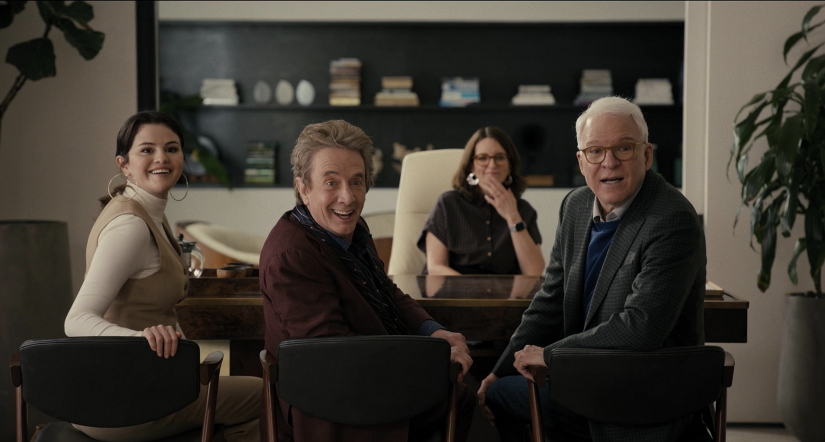 Tina Fey is among many stars who make cameo appearances in “Only Murders in the Building,” along with stars Selena Gomez, Martin Short and Steve Martin. Season Two debuted on June 28. Photo courtesy IMDB

It’s hard to imagine anyone going through life without laughing at Steve Martin or Martin Short — but that’s just my opinion.

Whatever role they assume or shtick they deliver, both actors have proven themselves masters of comic timing and delivery across the generations of viewers that have watched them on television, laughed heartily at their movies and cheered whenever they’ve co-starred onscreen.

I myself had the chance to catch the pair when they stopped at Tanglewood in Lenox, Mass., on their tour, “An Evening You Will Forget For the Rest of Your Life.” From start to finish, their banter had me cracking up on Tanglewood’s lawn.

Longtime fans and novices alike can now laugh as the duo’s signature brand of crisp, clean comedy unfolds in the second season of the Hulu channel original program, “Only Murders in the Building.”

I was first introduced to this show by a trick-or-treater who came to my grandparents’ stoop last fall dressed as Martin Short’s character — complete with a handmade carton of “Gut Milk.”

You have to watch the show to get the running joke, so watch I did.

As soon as the first episode reached the credits, my reason for watching quickly went from “Why not?” to “Why did I wait this long to watch?”

On the surface, these three couldn’t be more different. But they come together through their shared love of a true crime podcast — and then by an actual crime in the ficational Arconia on Manhattan’s Upper West Side (which is actually the landmark Ansonia apartment building at 79th Street).

Inspired by their beloved podcast, they decide to investigate the murder of fellow Arconia resident Tim Kono — and to report their findings to the world through their very own podcast, called “Only Murders in the Building.”

As is the case with most mystery shows, each member of the trio has skeletons in the closet, some of which surface and complicate their investigation.

I binge-watched the first season alongside my favorite puzzle solver. We were thrilled to stream a show that struck a flawless balance between comedy and crime and also delivered a mystery carefully crafted enough to knock viewers off the track and leave them hungry for the next episode.

As the show’s star trio narrows down the list of suspects, viewers will get a chuckle out of watching the Arconia’s other residents come to life, each with their own backstories and personalities. Viewers will also appreciate seeing familiar faces appear on screen in a new capacity, including Jane Lynch, Amy Ryan (Michael Scott’s love interest on “The Office”) and Nathan Lane (who doesn’t love Nathan Lane?). The rock star Sting also makes an appearance — and is briefly a suspect.

Having left its viewers with a cliffhanger at the end of the first season, the show’s second season started streaming on June 28 (on Aug. 2, the show was up to Episode Seven).

On top of investigating a new murder at the Arconia, viewers will have a chance to get reacquainted with the trio and all the Arconia residents they met in season one — and meet some new guest stars, including Amy Schumer, Cara Delevingne and Shirley MacLaine.