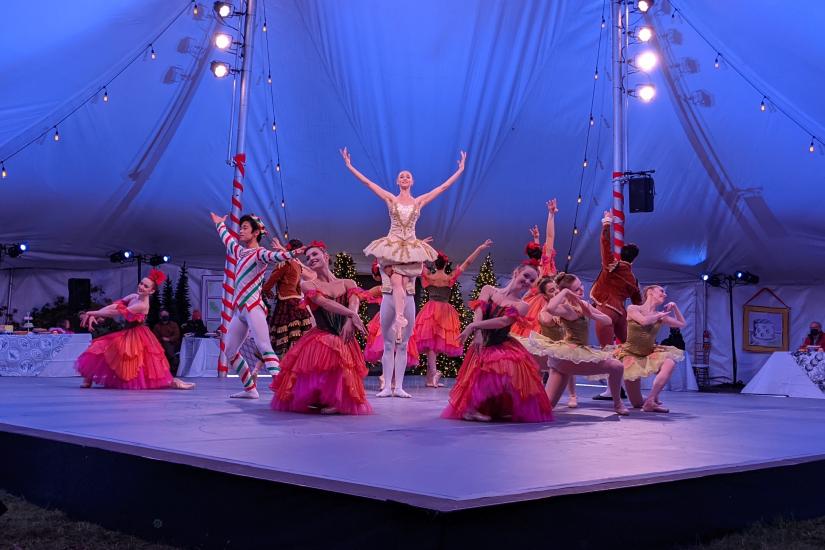 Ballet Collective’s performance of “The Nutcracker” inside and on the grounds of the historic Wethersfield estate in Amenia, N.Y., can be seen “virtually” until Dec. 26. Photo by charlotte Rare​

‘The Nutcracker,’ Performed Live In and Around Wethersfield

For many of us, the holiday season isn’t complete without watching or listening to Tchaikovsky’s “The Nutcracker.”

While it’s comforting to watch a favorite older version (such as the New York City Baller production featuring a young Macaulay Culkin, from 1993), it’s of course wonderful to watch a new version of this old favorite.

There’s an innovative new version now available for streaming that was filmed earlier in December on the grounds of Chauncey Stillman’s grand Wethersfield estate in Dutchess County, N.Y.

The ballet, which begins in the living room of a manor house, is performed in and around the grounds of the estate. Costumes for the party scene were designed by the late and very elegant Oscar de la Renta (who was for many years a part-time resident of Kent, Conn.), and Todd Snyder, who does kind of campy, fun modernizations of American classic clothing.

The performers are all with New York City’s Ballet Collective. As they entertain young Clara with holiday delights in the form of delicious short dances dedicated to “Tea” and “Sugar Plums” and exotic worlds, they also lead a tour of Wethersfield’s rooms and gardens.

Ballet Collective’s Troy Schumacher directed and was the choreographer. For the original live performance, small groups of socially distanced guests were invited to walk through the rooms and grounds to experience the ballet. It was an invitation-only performance that is now available “virtually.”

To find out how to stream the performances, go to the website at www.nutcrackeratwethersfield.com/about; you can also link from there to the Wethersfield website, which has more details on the neo-Georgian manor house, formal garden and carriage house museum. The property was once the home of Chauncey Stillman, grandson of James Stillman, chairman of the National Bank, which later became CitiBank. The estate is now managed by the nonprofit Wethersfield Foundation.

The streamed performances are free but donations will help the foundation to maintain the property. The stream will be available until midnight on Dec. 26.