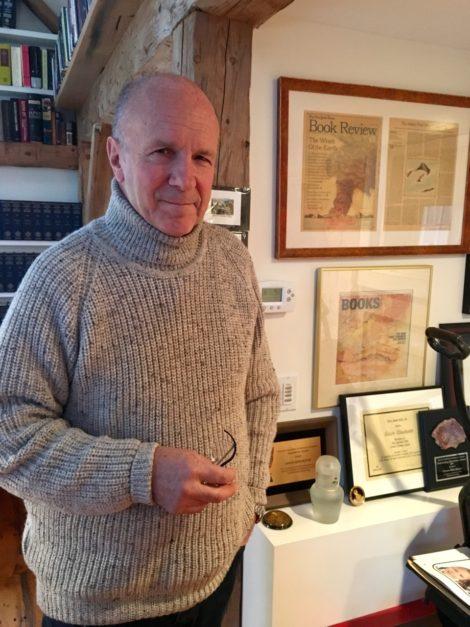 Simon Winchester talks about his new book, “Land: How the Hunger for Ownership Shaped the Modern World,” in a virtual conversation  with Becky Thornton,  on Jan. 20, hosted by Oblong. Photo by Andrew Blechman, The Berkshire Edge

Simon Winchester was an adventure traveler, a young Brit in the 1960s who started small by hitchhiking around North America and then dove deeper by joining a six-man sledding expedition in an uncharted section of the East Greenland ice cap.

He worked for a Canadian mining company in Africa, was a field geologist in Uganda and then worked on an oil rig in the North Sea before settling down to a career in journalism — which didn’t mean that he gave up on adventure travel, it simply meant that he began to write about it as well as experience it.

Perhaps his most dangerous reporting assignment was one that was closest to home: He was named Britain’s Journalist of the Year in 1971 for his coverage of the Irish Troubles (and that was even before he covered the events of Bloody Sunday in 1972).

Since then he’s been posted to Washington, D.C., India, the Falkland Islands and Argentina (where he and two other reporters were put in prison) and Hong Kong.

He eventually landed in New York City, where he wrote a nonfiction account of an American (who was in prison at the time) who was instrumental in helping to create the first Oxford English Dictionary in the late 1800s. That book, “The Professor and the Madman,” became a huge hit and was eventually  made into a feature film starring Mel Gibson and Sean Penn. The success of that book allowed him to focus solely on books, of which he has now written a dozen nonfiction titles as well as two books for young adults.

In the meantime, he also became an American citizen, and bought a house here, in the Berkshires, with his wife, Setsuko Sato, a former producer for NPR.

More than a dozen books

When Winchester does something, he really does it with determination. So after decades of globetrotting and excitement, he has mastered the art of living in The Country, a life that largely revolves around “letterpress printing, bee-keeping, astronomy, stamp-collecting, model railways and cider-making,” according to the bio on his website (www.simonwinchester.com/bio).

And, of course, to researching, writing and thinking deeply about topics that interest him. The latest topic, and the subject of his new book, is property rights, which he explores in “Land: How the Hunger for Ownership Shaped the Modern World” (it will be released on Jan. 19).

Most histories of England talk about the very early days of the island nation, when land was open and shared, for farming and grazing and living. At some point, a major change in British life and culture happened when plots of land were fenced off and became the property of individual owners.

In this new book, Winchester explores whether individual ownership of property is actually a good thing or whether land, like air and oceans, should be available for everyone on the planet to use and share.

Oblong Books and Music in Millerton is hosting an online conversation with Winchester on Wednesday, Jan. 20, at 7 p.m. via Crowdcast. He will be interviewed by Becky Thornton and Julie Hart, from the Dutchess Land Conservancy in New York state.

Thornton is the president of the conservancy, Hart is senior manager of stewardship and education.

To take part in the presentation, purchase a copy of the book from the Oblong website. If you purchase your book in-store, send an email to events@oblongbooks.com with a photo of the receipt. An event access code will be emailed 48 hours prior to the event.