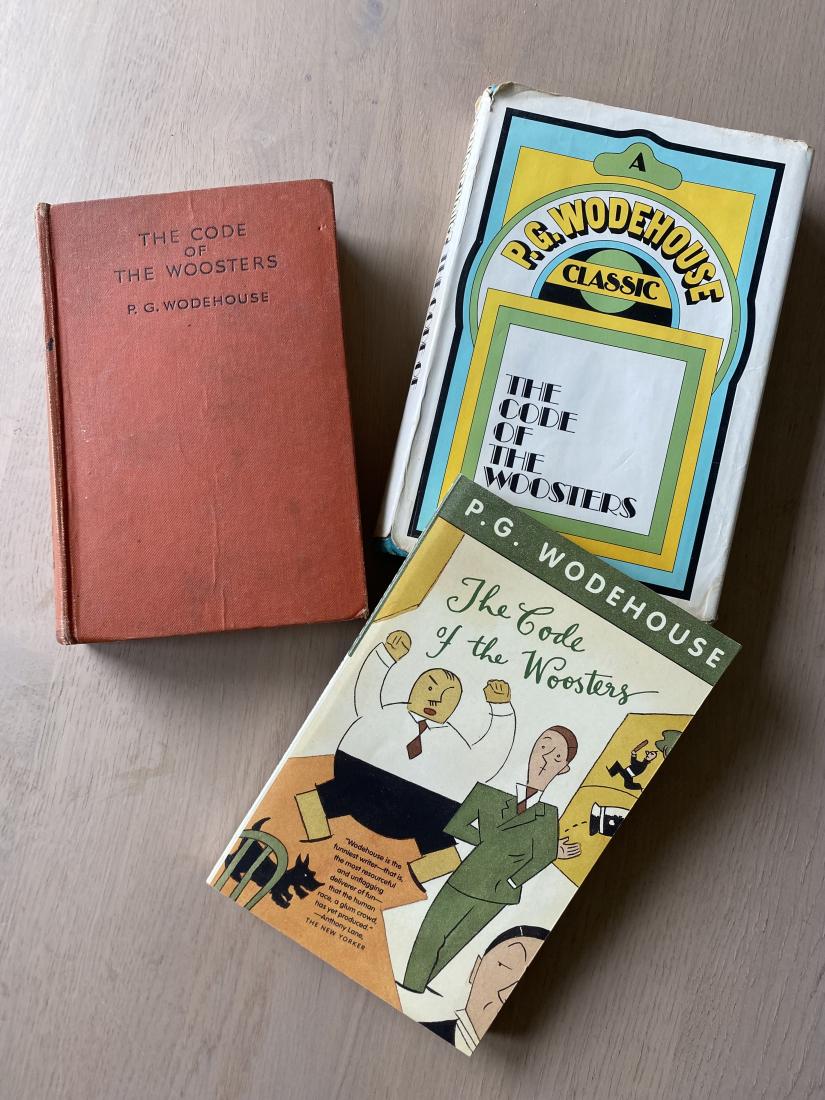 One of the joys of Jeeves is that most of the titles are reissued periodically, so that you can collect multiple versions of your favorites. Photo by Cynthia Hochswender​

Why We Love Wodehouse

It’s hard to find a writer with a better grasp of the language than Wodehouse.

Hardly anybody walks or comes into a room.

In Wodehouse World, they ankle, or sidle, or charge, or curvet.

The inverted high/low brow exchanges between Bertie Wooster (a rather literate upper-class twit) and Jeeves (the Spinoza-reading, Marcus Aurelius-quoting valet) are a continual feast.

Because the late P.G. was a prolific writer, it’s hard to boil it down to a top five for this, the scaliest sort of editorial assignment. The kind where Ye Editor fixes me with a beady look and demands, in a soupy tone of voice, 450 to 600 words of impassioned prose on the subject du jour, with photos of something, and did I mention it’s due Tuesday by noon?

I had a junior high school English teacher who had the same effect on me. Mrs. Levine’s glare would wander across the landscape of pimpled faces and inevitably rest on me. This was followed by the charge that mine was the hand that affixed the Playboy centerfold to the movie screen, so the full glory of mid-’70s female pulchritude was displayed when Mrs. Levine decided to show us a filmstrip on Edith Wharton.

(I must confess there was a certain substance to the accusation.)

Back to Wodehouse. To my mind, there are three categories in the oeuvre: the Jeeves and Wooster stories and novels, the Blandings Castle material, and everything else.

So, in no particular order, except I have to use numbers to get the word count up:

1. “Jeeves and the Impending Doom,” from “Very Good, Jeeves!” In this story Bertie and a cabinet minister are stuck on the roof of a summer house by a belligerent swan. In the rain.

They are rescued by Jeeves. To wit:

“Every young man starting life ought to know how to cope with an angry swan, so I will briefly relate the proper procedure. You begin by picking up the raincoat which somebody has dropped; and then, judging the distance to a nicety, you simply shove the raincoat over the bird’s head; and, taking the boathook you have prudently brought with you, you insert it under the swan and heave. The swan goes into a bush and starts trying to unscramble itself; and you saunter back to your boat, taking with you any friends who happen to be sitting on roofs in the vicinity. That was Jeeves’ method, and I cannot see how it could have been improved upon.”

2. “The Code of the Woosters” introduces one of Wooster’s most memorable antagonists, would-be Fascist dictator Roderick Spode.

The Spode menace is quelled when Jeeves discovers that Spode designs ladies’ underwear, a fact the Dictator (always capitalized) is reluctant to air publicly.

3. “Lord Emsworth and Others” is a short-story collection and as good a selection from the non-Jeeves Wodehouse as any.

It includes “The Crime Wave at Blandings,” in which the sinister Rupert Baxter returns to the castle, ostensibly to serve as tutor to the young George, but the ulterior motive is clear.

Involves several assaults with a pellet gun aimed at the sensitive regions.

4. “Heavy Weather” is a Blandings Castle novel, in which the supremacy of the Empress of Blandings (an immense pig) is threatened by arch-fiend Sir Gregory Parsloe-Parsloe’s Pride of Matchingham (a similarly massive animal).

5. Back to Jeeves for “Joy in the Morning.” This one features another of Bertie’s enemies, the pumpkin-headed D’Arcy (Stilton) Cheesewright, a massive man of volcanic emotions and weak intellect who is not happy when he learns that Bertie was once engaged to his fiancée, the imperious and intellectual Florence Craye.

Includes the agony of being compelled to read “Types of Ethical Theory,” and, after the sheer pleasure has faded, Nietzsche.