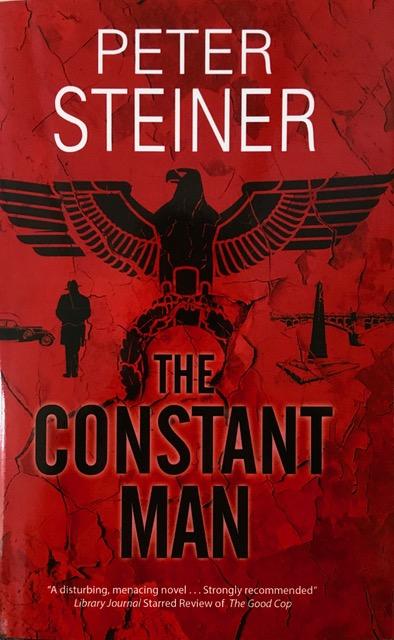 Peter Steiner from Sharon, Conn., has all the dream jobs that one might want. It’s not enough that he’s a talented painter, or a cartoonist for The New Yorker (and Lakeville Journal Co.), responsible for one of the most famous cartoons of the last half century (“On the internet, nobody knows you’re dog”).

He’s also the author of two series of mystery/thrillers, one set in southern France (where he has an envy-inspiring second home) and one set in Germany during World War II.

One writes what one knows and while Steiner (happily) did not survive the Nazi regime, his parents did. Steiner himself was a professor of German before embarking on his career(s) in the arts/culture/entertainment.

He has just released the second novel in the World War II series, following “The Good Cop” with the new “The Constant Man,” which will be released on June 1 by Severn House.

“The Good Cop” was released in 2019 and introduced police officer Willi Geismeier, doing his best to remain untarnished in a corrupt world.

In that novel as in this new title, Steiner unabashedly draws parallels between the Nazis and the contemporary American political scene.

“As the son of refugees from the Third Reich, I am naturally interested in understanding autocracy and how it can come about in an enlightened society,” he said of “The Constant Man.  “When autocracy started taking root in the United States in 2016 I was moved to write about it. These two novels are my personal exploration of complicity and resistance.”

In this new entry in the series, Geismeier is eluding capture by the Nazis while trying to stop a serial killer who has already killed one of the police officer’s close friends.

Although this is fiction that tackles tough subjects, the author says that his goal above all is to entertain the reader.

And he does so, in part, by creating a main character whom we can trust to bring order to a disordered world.

“The Constant Man” will be available at Oblong Books in Millerton, N.Y., where they will have copies signed by the author. The Hotchkiss Library of Sharon will host a Zoom talk with Steiner on Tuesday, June 8, at 7 p.m.