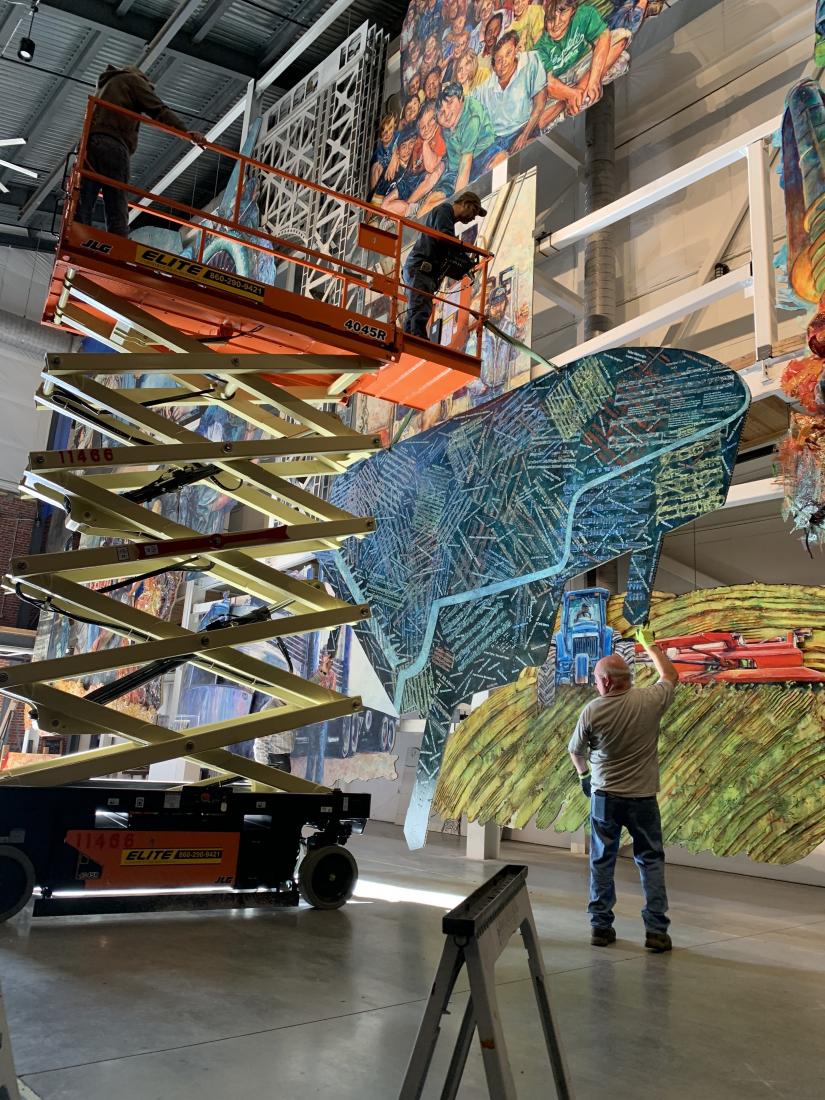 The latest installment in the massive American Mural Project in Winsted, Conn., is a metal panel shaped like a piano and etched with the names of 118 remarkable American musicians — and their favorite piece of music. Photo courtesy AMP ​

From Visual Art to Music, AMP Continues to Grow

Blending Bach and social responsibility has been a lifelong goal of cellist Yo-Yo Ma.

How fitting, then, that the critically acclaimed musician is represented in the most recent art installment at the American Mural Project (AMP) in Winsted, Conn., the world’s largest indoor collaborative artwork whose very foundation is built on community engagement.

Ma, along with more than 100 composers, vocalists and instrumentalists, is featured on a larger-than-life, 18-foot piano made from a sheet of aluminum, which was recently hoisted 48 feet high and attached to a section of the 120-foot-long mural.

The mural, which represents American workers and was launched by Sharon, Conn., resident Ellen Griesedieck in 2002, is housed in a historic mill building in Winsted. The project is expected to be completed in two years.

The piano piece, four years in the making, said Griesedieck, pays tribute to American music. “It has been resting on my studio floor while other projects move into place on the mural,” she said.

“In fact, we disassembled and moved hundreds of aluminum panels out of my studio these past three years while walking over the blanketed piano.”

In keeping with the concept of collaboration that is at the heart of AMP, the artist said she contacted music artists representing every genre of American music and asked them for their favorite score to include on the piano.

“I further complicated this by deciding how beautiful the surface would be if I burned stencils of the artists’ names and scores and then transferred them onto the aluminum with metal paints and patinas,” a process that turned out, she said, to be extremely time-consuming. But once the artist started, there was no stopping, especially as the overlapping scores began to yield a visually stunning pattern.

Another challenge Griesedieck faced was selecting from a list of “thousands and thousands of gifted musicians who live and work in this country” the 118 artists to be featured on AMP’s piano. The final selection reads like a Who’s Who of American Music — with numerous Tri-state region musicians represented.

Griesedieck said that over the summer AMP hosted a few small concerts by Paul Winter, Theresa Thomason and Joel Martin.

“We discovered that the acoustics in our giant space are phenomenal,” she said. As a result, the next chapter of AMP will be “opening our space for regular music events.”

With each piece of artwork installed, Griesedieck explained, the acoustics in the cavernous space improve. The effect of music when it reverberates off the surrounding mural, she said, “pops it back at you” with a rich sound.  Referring to the idea to host concerts at AMP, “We didn’t plan for it. We really have been given a gift.”

Although AMP is not currently open to the public, visitors will have an opportunity to get a sneak peek at the latest installations during Open Mill Days on Saturday, Dec. 5, and Sunday, Dec. 6.

Tours will be offered at 1 p.m. each day, lasting about 45 minutes, at AMP’s location, 90 Whiting St., Winsted. Pre-registration is required for the tours (no walk-ins), which are limited to 16 visitors, by calling 860-379-3006. A minimum suggested donation of $10 is encouraged at the time of registration.