Skip to main content
THIS WEEK'S DIGITAL EDITIONS
Home / Home
Home » Compass Ae Art » Out of the Darkness, Glimmers of Hope At RE Institute 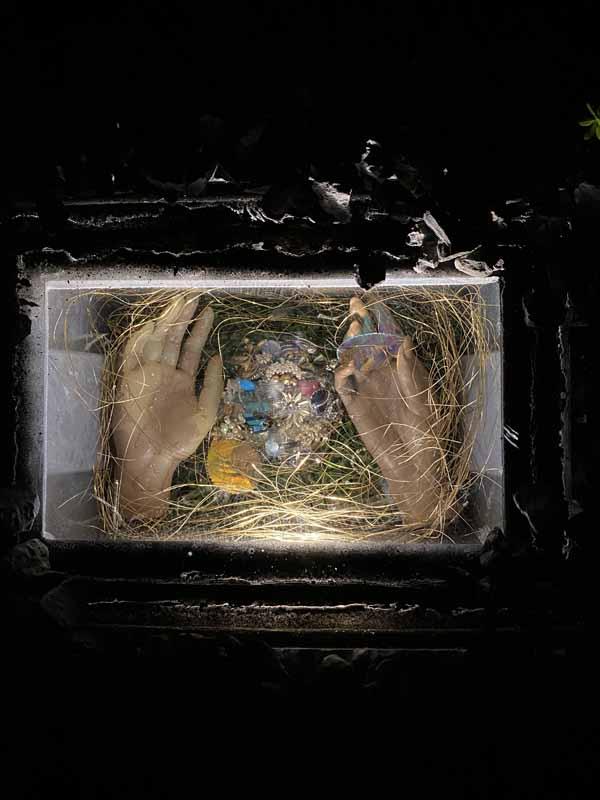 Jonathan Bee created a coronavirus particle out of jewels for his entry into the show Together in Isolation at the Re Institute in North East, N.Y. (Millerton). The outdoor show can be seen in the evening on Wednesdays and Fridays by appointment. Photo courtesy Re Institute

Out of the Darkness, Glimmers of Hope At RE Institute

The Re Institute in North East/Millerton, N.Y., has an ongoing outdoor showing of work by dozens of artist called Together in Isolation.

“The show is laid out along a path that meanders around a pond and through farm fields, allowing the viewer to explore at their own pace and direction,” according to the Re Institute website.

Each piece is laid out in a clear plastic box and then put in the ground, with a small light behind it.

“The experience of walking in the dark, surrounded by the rich, seasonal sounds and smells of the outdoors is a major part of the exhibit.”

New work will be added to the exhibition “until such a time as we may all safely gather indoors together again.

“Then Together in Isolation will end as it began — paradoxically — with a celebratory closing instead of an opening.”

The work can be seen at the Re Institute, 1395 Boston Corners Road, in North East/Millerton on  Wednesdays and Fridays from dusk until dark by appointment; go to www.TheReInstitute.com or call 518-567-5359. Photos of the work and short videos by the artists can also be seen at the website.