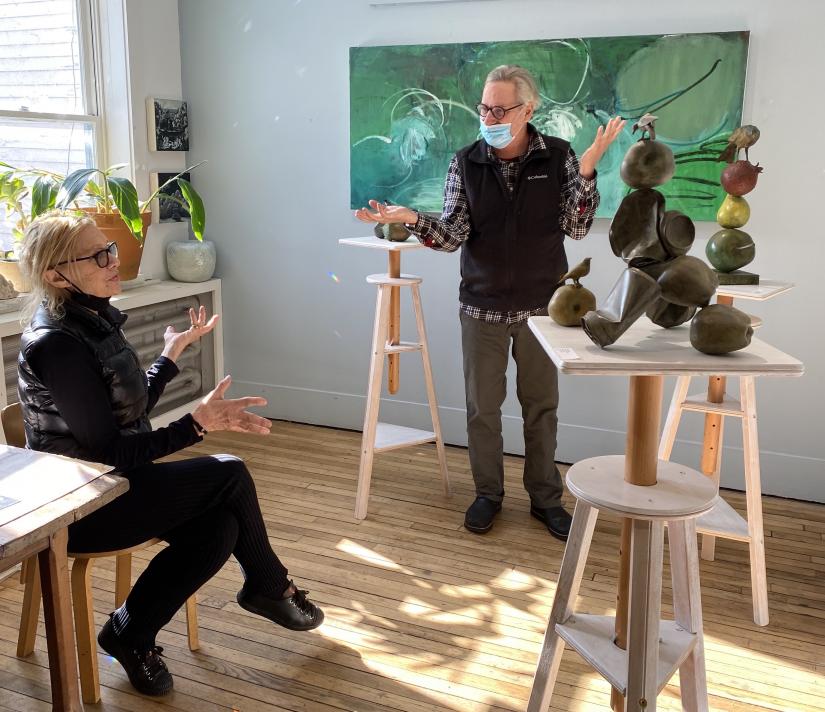 Sculptor Peter Woytuk, at right in photo, has a new show of work at the Argazzi Gallery in Lakeville, Conn. (which is owned by Judith Singelis, at left in photo). The works in the show will rotate, but there will be many of the bronze ravens  that are a Woytuk specialty. Photo by Cynthia Hochswender​

The Lightness of Beings Made of Bronze

You could expect the creator of massive bronze animal sculptures — including the giant bulls on the lawn at The Hotchkiss School in Lakeville, Conn. — to be a weighty, heavy, ponderous person. Adding to that expectation: the weight of adoring reviews from the national press, calling him among other things The Greatest Sculptor of Animals in the Western World in the Late 20th Century.

And yet Peter Woytuk is buoyant and unexpectedly gentle when he blows like a light breeze into the Argazzi Gallery on Route 41/44 in Lakeville’s Historic District.

Perhaps it’s the obvious delight he finds in meeting up with his longtime friend (who now represents his artwork as well), the Argazzi Gallery’s owner, Judith Singelis.

It’s also the joy of revisiting the 15 pieces he has created for his new show at Argazzi, which has just opened and will remain on display until March 28. The works in the show will rotate in the coming months.

Woytuk is certainly capable of sitting still in a chair and talking about his work, his life, his friendship with Singelis and the way that COVID-19 has clipped his wings.

But he seems happiest when he’s released to move freely around the three rooms of the gallery, playing with the sculptures.

The new work is on a much smaller scale than many of Woytuk’s works (again, think of the three Hotchkiss bulls, and the bull that was for many years a resident of the business center of Kent or of course the elephants and other large animals that he made that marched up Broadway in New York City in 2011-12).

Woytuk can talk to you  with ease and fluidity as he plays with his sculptures, picking up pieces, stroking them as though they were pets, unscrewing parts, screwing them back together, shifting them around on the pedestals where they are displayed.

The small ones are shockingly light; they wouldn’t hold a door open on a windy day.

He loves it when people touch his sculptures, not only because it makes him happy but also because it deepens the patina on the bronze surface of these sculptures.

He was surprised years ago to learn that children were climbing on his bull sculptures; now he consciously creates work with the expectation that the works will be rubbed and loved.

Which is not to say that he cedes the surface finish of the work to chance and the attention of strangers. Some of the pieces in the Argazzi show have a fascinatingly complex, almost graffiti-like network of scratches and marks, almost like a communication from another world.

There are ravens in the new show, of course, and apples, of course. There is also a small horse, curving, voluptuous and like so much in Woytuk’s world,  lighter than you might expect. Even the massive bulls, which are about 8 feet tall, aren’t as heavy as you’d expect.  “About 1,000 pounds,” Woytuk estimated. “Maybe 1,500.”

Bronze is heavy, obviously; but these sculptures are cast, and are hollow on the inside.

These new pieces are small; the artist is separated from the larger cast pieces that are in China and Thailand, where he sometimes lives — in both countries; appropriate to his unfettered balloon personality, it’s hard to lock down exactly where he lives and has lived. Suffice it to say that for the moment he is living and working in Goshen, Conn.

He longs to get back on an airplane and return to Asia, in part because foundries there have no problem casting sculpture on a large scale. They have, after all, perfected the art of creating 20-foot tall statues of the Buddha.

But for now he’s creating new work using smaller elements, some of which he’s made here in Connecticut, others which he brought with him when he returned to New England last year.

Even though in the Tri-state region people tend to think of the bulls when they think of Woytuk, the artist says that blackbirds (especially ravens) are the animals he most likes to cast in bronze.

“They’re very playful, lively and rebellious,” he said. “I love that about them.”

The birds are obliquely or centrally present in nearly everything he does. They ride on the backs of larger animals. They perch on cast-bronze branches that are an homage to Alberto Giacometti.