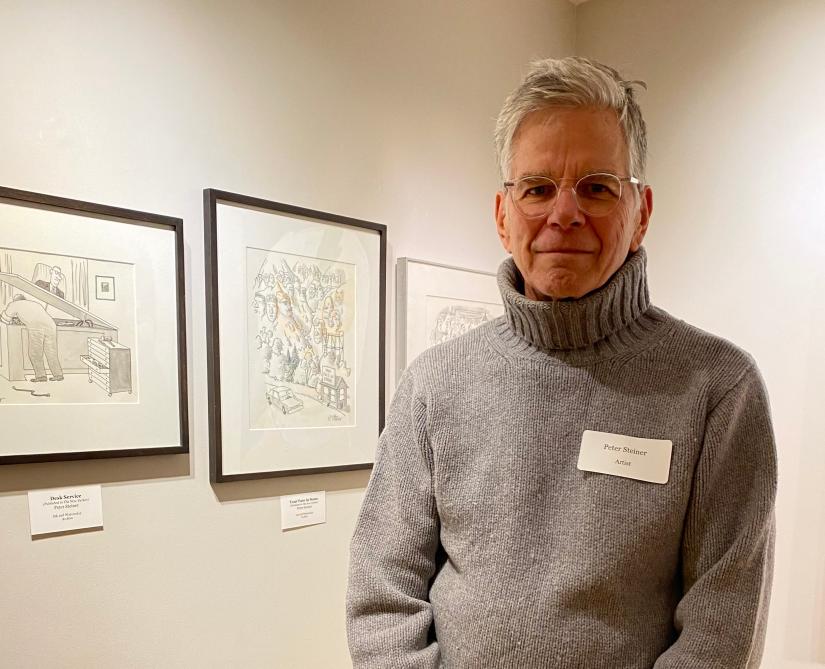 Illustrations on view at Historical Society

By all accounts the opening reception for the current exhibit at the Sharon Historical Society in Sharon, Conn., was a superb success. Visitors mingled with artists and lingered over their works, all part of the current gallery exhibit, “Illustrators in the Northwest Corner.”

The opening event was held on Saturday, Jan. 14. Selected works of the late masters Eric Sloane and Arthur Getz were a strong draw, paired with the showings of the works of 17 significant area artists.

Opening alongside the illustrators’ exhibit is a small, locally significant display titled “The Ebenezer Gay Family,” presenting a glimpse into the life and family tree of this 18th-century local farming family.

As an illustrator, an artist entices the viewer into instant dialogue with an evocative story being told. And each piece in the current exhibit has a story to tell. There is whimsy, certainly, along with profound commentary and emotional appeal. Importantly, there is remarkable art created by astoundingly talented illustrators who live among us, members of our communities.

Eric Sloane, 20th-century artist, gained recognition for his rich landscapes and particularly his cloud paintings, a few of which are included in the exhibit. Arthur Getz enjoyed a career between 1938 and 1988 creating a wealth of covers for The New Yorker magazine. Representative samples of the 213 covers he created are included in the exhibit, positioning the original painting beside the corresponding New Yorker cover.

Garth Kobal attended the exhibit eager to see the illustrators’ works. He has been the curator of the ArtWall at the D.M. Hunt Library in Falls Village, Conn.

“We’ve shown some of these artists at the library,” Kobal said. “We’re all lucky to live among so many practicing artists in the area,” he added.

Among the illustrators invited to participate in the invitational contemporary exhibit, cartoonist Peter Steiner related that he began practicing drawing when he was 4 or 5 years old.  However, his professional career, including many years of cartooning for The New Yorker magazine, began at age 40.

“I like showing my work,” he said. “You want the stuff to be seen.”

Steiner even has a blog titled “Hopeless but not Serious.” And a gift for readers of The Lakeville Journal, Steiner’s cartoons are a weekly feature within the editorial pages.

Warren Prindle, creator of “Bronx 55,” an oil painting selected for the exhibit, characterized himself as “a small fish in a sea of big fishes." The painting is to become the cover of a comic book.

The exhibit is a “meeting of art and history,” said Mary Terrizzi, wife of Kent artist Scott Bricher who has provided illustrations for Mad Magazine for 20 years. His “Dogs Playing Video Games,” published in Mad in 2003 is a wittily engaging nod to the classic “Dogs Playing Poker,” inviting comparison.

“Every single piece is done to a deadline,” Terrizzi explained, describing the work of an illustrator. Bricher added that his video games painting was created over a single weekend, the time allotted by the magazine’s editors. An illustration can be a collaborative effort, Terrizzi said, with a finished work subject to scrutiny and adjustments by editors to fit their publication’s content sensitivities.

“Illustrators have a powerful effect on humankind,” Terrizzi said. The historical society illustrators’ exhibit invites visitors to experience that effect.

On view through March 3 at The Sharon Historical Library in Sharon, Conn. For more information go to www.sharonhist.org.