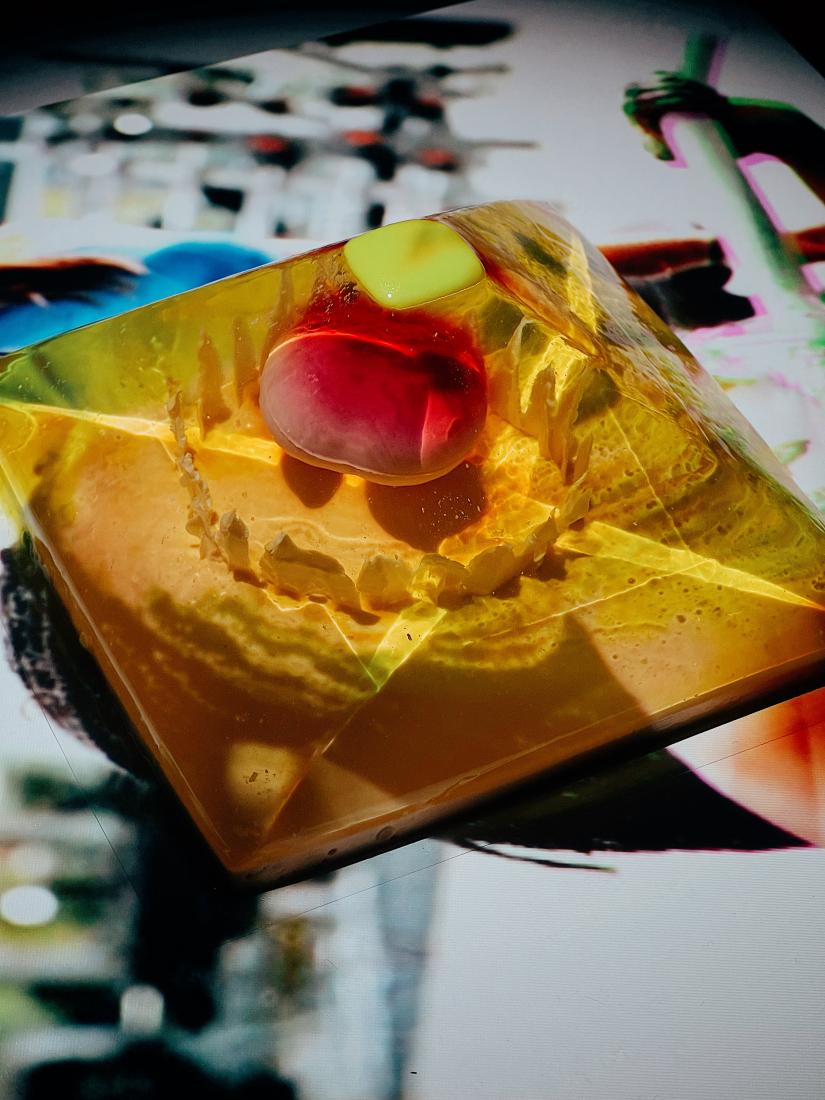 Getting high with my NFT edible

The mellow tingling that pulsates with an unprovoked, weightless euphoria has arrived. The wooden leg of my desk brushes against my leg — or did my leg brush against the desk’s leg — and I am in a brief fit of laughter. I am high on a piece of art I purchased at Standard Space, a contemporary gallery in Sharon, Conn.

“Zubenelgenubi” by Kristin Worrall is both a THC-laced dessert and an NFT — which might make me the first person in Litchfield County to not only purchase marijuana artwork, but also the first customer to walk away from a local gallery with a piece of digitally encrypted art.

Combining the culinary arts with performance art, Kristin Worall hosted a live auction at Standard Space on Saturday night, Dec. 3. All titled after science fiction influences —from actual stars to names of alien species pulled from 1980s paperbacks — the gelatin sculptures fused the perfectly molded aspics of the 1950s domestic goddesses with intergalactic oddity and vague sexuality. The visuals of popular science fiction have always dabbled in abstract phallic and vaginal imagery, turning space into a Freudian landscape of the absurd. Consider the birth-anxiety of 1979’s “Alien,” or the teeth-baring vortex pit in 1983’s “Return of the Jedi,” or the vacuum-mouthed sandworms of Frank Herbert’s “Dune.” Of course, within the history of dessert are plenty of cheeky references, from the Neapolitan naughtiness of the Capezzoli di Venere — the Nipples of Venus — to the myth that the Champagne flute was modeled off the curves of Marie Antoinette.

“Zubenelgenubi” was the only THC-laden creation sold at Worrall’s performance, but it singularly marks a new direction possible for the conflation of art and marijuana in Connecticut after recreational use was legalized in the state in 2021. Possibilities that may be curbed by small-town government. In Falls Village, Conn., the hometown of The Lakeville Journal Company’s office, a special Nov. 10 meeting of the town’s Planning and Zoning Committee concluded by barring both the issue of growers licenses in Falls Village and licenses for recreational marijuana retail. Resident Daly Reville said at the meeting that “bringing people into town as an adult cannabis retail destination didn’t seem practical or advantageous to the town.” Meanwhile, Hartford Business reported this week that “Connecticut’s cannabis industry could account for more than 10,000 jobs just a few years after the recreational market launches.”

It does not escape me that in purchasing this giant gummy edible — which may leave me crashing into a deep slumber — I also purchased my first NFT in a crashing market. It’s been less than a month since FTX filed for bankruptcy, leaving Sam Bankman-Fried, the former chief executive of one of the leading digital currency exchanges, as a figure of Internet and old print mockery. This is the Sisyphean tumble after years of cryptocurrency’s dogged climb towards legitimacy.

For context on the inflated market of NFTs, think of the Internet as a large island nation, except instead of stumbling upon it after voyaging on the sea, we built it. Now that land needs to be claimed, bought, and sold — we must colonize our own creation, and “we” (meaning “they”) must find a way to make even a leaf on a tree a transactional opportunity. NFTs — non-fungible tokens — are a way of turning images into profit. This may sound like the very definition of the art market, except the baseline concept isn’t creativity, but a creative solution to a problem. Images, even copyrighted images, are duplicated and dispersed with little control across the Internet, which makes them free — a problem. So NFTs  are commonly bought with cryptocurrency like ether used on Ethereum, an open-source blockchain platform. One ether as of writing this is worth $1,282.9, a significant drop from this time last year. A purchase of an NFT is also the purchase of an individual identifier recorded in a blockchain ledger. It does not necessarily give the buyer supreme copyright, but the system does bring in the idea of an online image as a particular object.

Think of an NFT as the newspaper you’re reading. It is an exact copy of one of the thousands of newspapers this publication printed and distributed this week, but only this newspaper is the one you’re holding. It contains the oil on your fingertips, your coffee stains, a stray tear in the paper. Turn to the front and you will see a serial number, clearly identifying this as a particular newspaper — one of a copy, but one of a kind.

The traditional-medium artist to make the biggest splash from the NFT craze was Damien Hirst when he launched the conceptual project “The Currency” through the international art services business Heni. Hirst first made his splash in the 1990s with his formaldehyde-pickled tiger shark, and the bad boy of British art has continued to invent new attention-grabbing methods that make sure even those with little contemporary art knowledge are passingly familiar with his fame. In a 1994 issue of Parkett the late author Gordon Burn wrote, “It is one of Damien’s great strengths, both in the cool medium of his work and the hot medium of his person, that he is always pushing towards full disclosure.” Critic Julian Spalding has called Hirst’s work ”the sub-prime of the art world” more in line with creatively-marketed, hot-button luxury goods than lasting and meaningful art.

For his first delve into the crypto market, Hirst returned to a familiar subject, his instantly identifiable — and by no small coincidence, easily duplicable — prismatic dot paintings. This dot series was presented by Hirst and Heni as “a collection of 10,000 NFTs which correspond to 10,000 unique physical artworks which are stored in a secure vault in the UK.” Once the purchase had been made, the game began. Unlike my gelatin edible and its corresponding NFT, Hirst’s buyers did not have the option to keep both — they had to choose. Either delete the NFT or burn the physical piece of art. Which one held more currency? This October Hirst even welcomed fans to watch him burn the canvases which had been viewed as less desirable, less collectible, than their NFT counterparts.

Worrall described “Zubenelgenubi” as a melding of orange blossom and blackberry flavors, but devouring the gelatin by the forkful, all I could taste was the THC. It wasn’t unpleasant actually, a sexy sense memory that reminded me of having a joint on my tongue, the sound of the lighter flick, the burn and crackle of paper, my proximity to someone close by, breathing on my face as we passed the spark between drags. But as the high left me sinking into the sofa, the blaring the sound of Hans Zimmer’s “Dune” score with its otherworldly ancient chanting eclipsing all other senses like a great, black sun enveloping the earth, I realized I had inadvertently recreated Damien Hirst’s experiment. It hadn’t been intentional, the gummy was food that would eventually expire, but by ingesting it I had destroyed the artwork, leaving only the blockchain behind."

"Take Comfort" by Kristin Worrall is on view through Dec. 18  at Standard Space in Sharon, Conn.