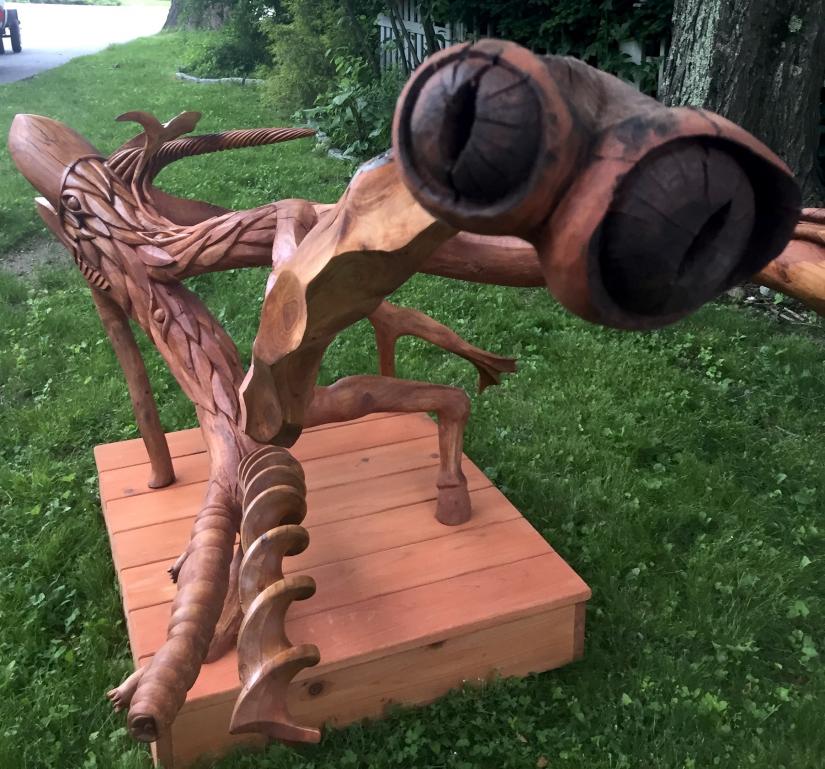 Sculptor Joseph Jude Brien has created a sculptural homage to the work of author Madeleine L’Engle. Photo by Joe Brien

This has been the summer of author Madeleine L’Engle, at least here in Litchfield County, Conn., where the author spent much of her later life (she and her husband even owned the general store in Goshen, Conn., for many years).

This summer, the Goshen Players are presenting a stage production of L’Engle’s most famous work, “A Wrinkle in Time” (most recently made into a Hollywood feature film released in 2018 and starring Oprah Winfrey, Reese Witherspoon and Chris Pine.

“Wrinkle” is part of a five-book series (known as th Time Quintet series) that follows the lives of the mathematically gifted Murray family. Much of what the series explores is the idea of travel through time and space using a wrinkle in time (time is the fourth dimension, time/space travel is the fifth dimension).

Although the books are about fairly sophisticated concepts of physics, their popularity is largely due to the complicated dynamics of siblings, families and loyalty.

It seems fitting then that L’Engle’s own family continues to honor the author’s memory (she died in 2007).  Charlotte Jones Voiklis is L’Engle’s granddaughter; this year she commissioned a West Cornwall, Conn., sculptor and educator named Joseph Jude Brien to create a sculpture from an old apple tree on the family’s property here that was blown down by a windstorm in 2020.

Voiklis asked Brien to create a sculpture from the tree that was inspired by the Time Quintet. After giving it some thought, Brien came up with  a work that evokes some of the non-human characters that populate L’Engle’s books.

“She describes many fantastical creatures including a majestic unicorn, a feathered beast with multiple eyes, helpful serpents, benevolent dragons and microscopic organisms dwelling within our DNA strands,” Brien said, challenging viewers to see how many creatures they can find in the work.

For now, the sculpture can be seen at the Old Goshen Town Hall at the traffic rotary where Route 4 meets Route 63. The property is the home of the Goshen Players (their production of “A Wrinkle in Time” was staged between June 3 and 12).

This fall, Brien said, “we may transport the sculpture to Wisdom House in Litchfield, where there is going to be a Madeleine L’Engle  retreat.

“I’m thrilled to have created this piece and look forward to its journeys in the future. It will eventually be on display, outdoors, at Charlotte Jones Voiklis’s home in Goshen, where her grandmother, Madeleine L’Engle, lived and wrote many of her books.”