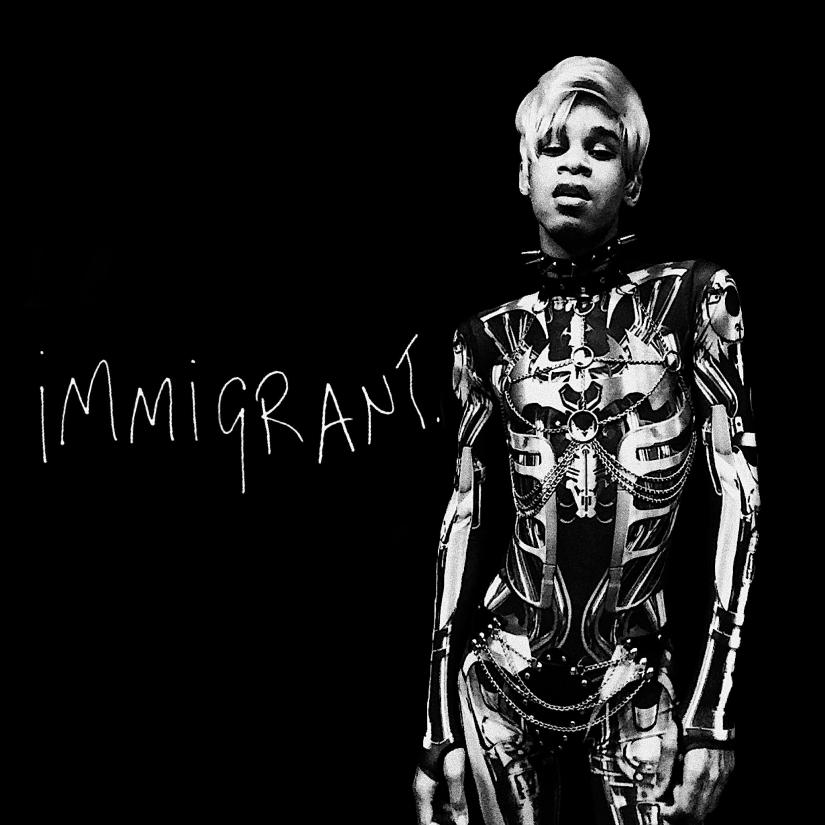 Vemilo’s latest album, “Immigrant,” can be heard for free by scanning the QR code on the poster that is now appearing on walls in area towns. Photo courtesy of Vemilo

Creating Art as a way to Find Your Own Truth

It seems to be true that our most beloved artists, and certainly those with the longest careers, are those who are able to reinvent themselves. And if  it is indeed true, then Northwest Corner native Vemilo is likely to have a very long and fulfilling career in the arts.

Vemilo is many things at once, but most simply, for starters, he is a 25-year-old native of Salisbury, Conn., who now mainly lives and works in Millerton, N.Y.

He is flamboyant and fashionable and fearless and completely himself — whatever that is from moment to moment. Primarily he performs, in life but also onstage and on social media.

“I’m a musician, I sing and dance, I do a talk show on Facebook, called Tea with Ve,” he said recently, in his tiny studio/office upstairs in downtown Millerton.

But the heart of his message matters more than the specifics of which art form he tries on at any given moment.

“My whole purpose in life is to break boundaries and stigmas, to bring people together through my music and artistry. I want to create a safe space where people can free themselves.”

His inclusive vision came beautifully to life during Pride Month in June, when he was the much-lauded center of several Pride events in Millerton.

But Pride month wasn’t the first time that Vemilo has felt enveloped in the love of his community.

“I’ve had a lot of guardian angels,” including his godparents Brooke Lehman and Greg Osofsky, his “Gran-Gran Joan” Osofsky and an early supporter and friend, Stephanie Pellegrino, owner of Petpourri in Lakeville.

“She and [her husband and business partner] Frank are amazing people. I used to come into the shop and we would talk for hours, about fashion and life and music. She was a solid foundation for me, she never made me feel like a nuisance.”

Some of the changes in Vemilo’s art are a reflection of his own journey to find who he is, to “live his truth.”

“I’m a person who’s been through some life-testing stuff,” he said. “But at 25, I have a clearer idea of who I want to be. My drug is writing songs. It’s the clarity of me, of being my own best friend and my own biggest fan.”

Posters have appeared on shop walls lately that have a link to an album he made two years ago, called “Immigrant.” (The link has expired, so anyone who wants to hear the music should go to www.vemilomusic.com.)

The album's  inspiration came from subway trips through Brooklyn, N.Y., and feeling like a stranger, an immigrant, a person with blue hair in a world of people with not-blue hair.

“Immigrant” is primarily an album of EDM, or electronic dance music.

“It’s gritty and has some nice rock, anthemic covers. It has some hard edges but it’s fun. Like most EDM, it has a lot  of 1980s synth vibes.”

He and his creative team (Haus of Ve) made a music video of one song from the album, called “Lie to Me,” which can be seen on his YouTube channel; search YouTube for Vemilo PA (which stands for Performance Artist).

He will also be recording new videos that will be streamed online. These will follow the same format as Tea with Ve, but will be pre-recorded, not live.

Vemilo’s work can be enjoyed at no cost.

“I just want people to hear it and realize that you can do hard things and still celebrate your truth.”

That truth can change, grow and evolve — if you’re fortunate. And Vemilo feels he has been extremely fortunate.

“I follow my spirit and let it tell me where to go. So far, it’s been very good.”