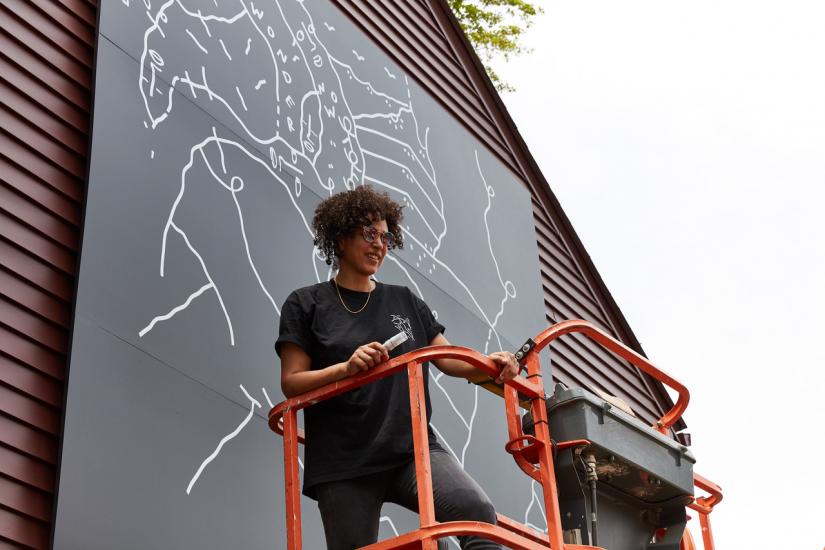 Shantell Martin is one of four artists creating murals in Sharon, Conn., that will be unveiled on Saturday, July 3. Photo by Theo Coulombe

Coming Together Joyfully To Celebrate Art and the Village

Periodically, there is an event on the Green in Sharon, Conn., that draws people from all over the region for an evening of fun, refreshments and socializing.

For children, that event is Halloween. For adults, the event is usually something centered around art and it often is incited to some degree by Theo Coulombe, owner of the Standard Space art gallery on Main Street. It was Coulombe who helped organize some of the very popular Art Walks with the Hotchkiss Library of Sharon around the Green in past years.

This weekend, he has joined forces with his friends Rafe Churchill and Heide Hendricks, the partners in Hendricks Churchill who have so lovingly restored many of the aging commercial buildings on West Main Street.

Churchill and Hendricks recently commissioned four murals to be painted on the sides of properties in this downtown section of Sharon. The murals are by John-Paul Philippe of Sharon, British visual artist Shantell Martin (both of whom have shown at Standard Space), Kirby Crone of Hudson, N.Y., and Hollis Churchill of Sharon, who is debuting a new online shop called PeaceLoveDoe.

There will be a downtown party on Saturday, July 3, with ice cream at J.P. Giffords and, at The Edward wine bar, a special sangria mix and live music from 3 to 6 p.m. The murals will be officially introduced at 3 p.m.

The night before, on Friday, July 2, there will be an opening of a new multimedia show of work by Joshua Frankel of Wassaic, N.Y., called “Emergent System,” which will include  two-dimensional works inside the gallery and a live performance on the Green of music on a grand piano by composer Missy Mazzoli, followed by a screening of a short animated piece by Frankel (which is accompanied on film by eight grand pianos playing simultaneously).

There will be an opening and reception at Standard Space beginning at 5:30 p.m. The gallery will close at 8 p.m. for the performance on the Green, which will last about 45 minutes.

Then the gallery will open again for drinks and conversation. Anyone planning to watch the show on the Green is encouraged to bring blankets to sit on. The rain date is Saturday, July 3.

To learn more about the gallery show, go to www.standardspace.net/upcoming--joshua-frankel-emergent-system---opening....