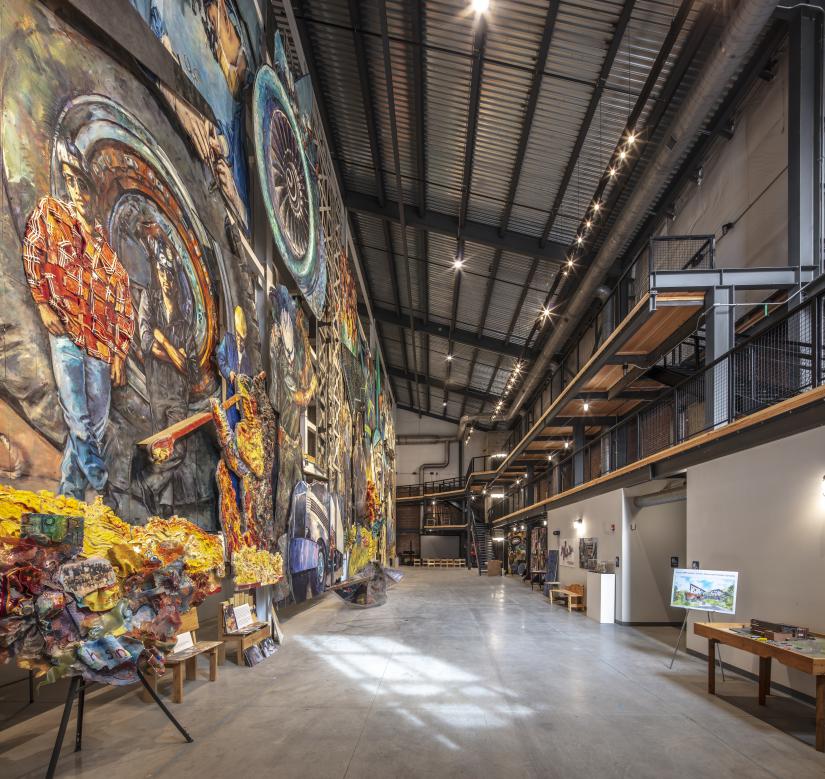 American Mural Project: Open and Ready for You

Many of us drive through Winsted, Conn., and think about all the interesting things that could be done with the empty former industrial and mill spaces in the center of town.

Some have been converted over the years into apartments and artist studios. Ellen Griesedieck of Sharon, Conn., went one step further and turned a former mill into an art project in and of itself.

A massive space requires a big idea and a lot of time. Such was the case with Griesedieck’s ambitious American Mural Project, which was first conceived in 1999 and has just been completed.

The setting is perfect for the American Mural Project, which is a tribute to American workers. The work began with the grooming of the site itself, including a cleanup of the property with a federal Brownfields grant. The state of Connecticut contributed as well, helping Griesedieck and her team pay for the cost of renovations that included raising the building’s roof 30 feet, to make room for the mural, which extends up five stories.

The mural was a true community effort, not just thanks to the government grants but also with art work contributed to school children from across the country, who were invited to visit and participate in the mural.

Griesedieck describes the mural as “a vivid compilation of three-dimensional sculptural vignettes portraying Americans at work—from heart surgeons to steel workers, firefighters to farmers, school teachers to fabricators of a 747 aircraft, and more. Constructed with unconventional materials including honeycomb aluminum panels, blown glass, clay, reclaimed wood, native indigo, and spackle, the mural offers an optical journey and sensory adventure through the past 100 years of work in America.”

The completed American Mural Project can now be seen at 90 Whiting St. in Winsted every Friday and Saturday from 10 a.m. to 5 p.m. and Sundays from noon to 5 p.m.

Admission is $12 for adults, $10 for seniors and veterans, $5 for students, and free for children 5 and younger. There is also a $25 unlimited access pass, for use during open hours in 2022. Tickets and passes can be purchased at www.americanmuralproject.org or in person.