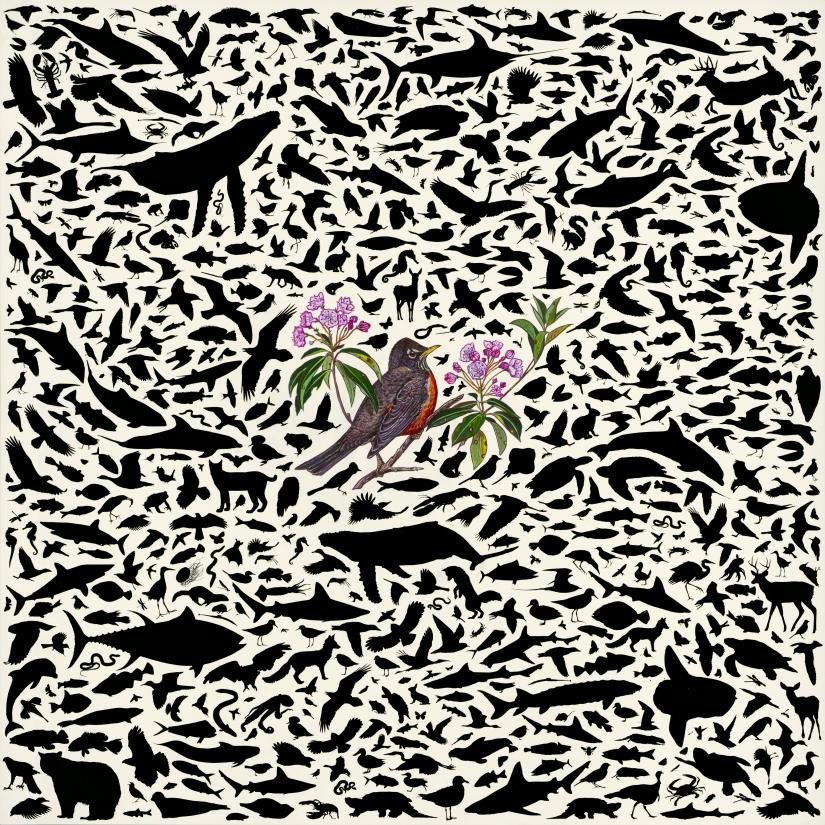 James Prosek has curated a show at the Wadsworth Atheneum in Hartford, Conn., that includes one of his own illustrations, at left, with silhouettes of native Connecticut and Long Island Sound animals. “The color bird and foliage in the center is the Connecticut state
bird (robin) and flower (mountain laurel),” Prosek said. Illustration by James Prosek

The Wadsworth Atheneum in Hartford is the host of a wide-ranging exhibition, “Made in Connecticut,” that celebrates the 25th anniversary of the Connecticut Art Trail.

The curator of the show is James Prosek, who wears many hats, including artist in residence at the Yale University Art Gallery.

Prosek published “Trout: An Illustrated History” in 1996, when he was a student at Yale. The book has 70 watercolors of the varieties of trout found in North America, and is a staple of any self-respecting angler’s fishing library.

His subsequent work is largely concerned with nature and human interaction with nature.

Prosek is the host of a YouTube video that provides a quick (a little under half an hour) overview of the show. (Type “James Prosek” and “Wadsworth” into the YouTube search bar, or go to the museum website, and click the link under “public programs” on the “Made in Connecticut” page.)

In the video, Prosek explains: “We wanted to do a show, not just of aggregate holdings but specific to Connecticut.”

Hence the presence of items not normally associated with art museums, such as brass buttons from Waterbury’s industrial heyday, a race car designed by the late John Fitch (a world-famous race car driver and formerly of Lime Rock, Conn., where he was a manager of the race track in its early years) and a rubber desk from Charles Goodyear.

And there is art: Lots of landscapes. Contributions from Native Americans. Paintings of the post-Civil War industrial boom and subsequent bust, showing “beautiful decrepitude.”

In a phone interview Oct. 18, Prosek said discussions about the “Made in Connecticut” show started in the summer of 2019. The show was supposed to open in June; the COVID-19 pandemic forced a change in plans.

Along the way the show got bigger, Prosek added.

Asked to sum it all up, he said the show celebrates “beautiful productions of the human mind and hand.

“It’s kind of a nice ramble, like a flea market,” he added.

Prosek was scheduled to perform musical selections online on Nov. 6 at the Wadsworth website. That show has now been postponed to early December. At present, he’s set to perform with Lindsey Fyfe. (Prosek’s on-again, off-again rock band, Troutband, is in an “off” stage.)

”Made in Connecticut” may be viewed in person. The Wadsworth Atheneum is conducting “timed tickets,” in half hour intervals.

Although the exhibit can’t be seen online, there have been several talks which you can watch online.

For details on the show and on Prosek’s concert, go to www.thewadsworth.org.