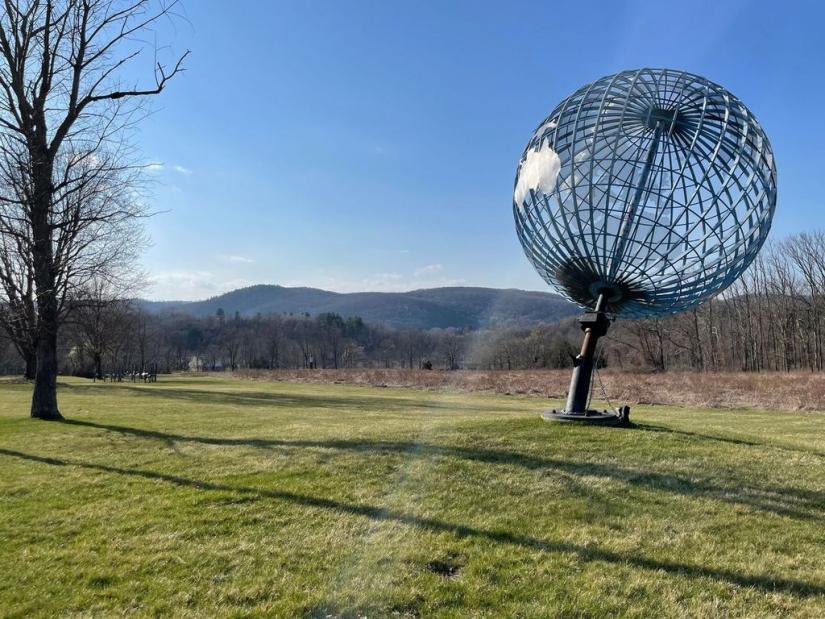 Located at 26 Benton Road in Wassaic, the open landscape at the World Peace Sanctuary has invited many trailblazers, walkers and other  visitors onto its grounds to convene with nature over the years. Photo by Matthew J. McGrath

WASSAIC — From the serenity of its nature trails and open landscape to the community programming geared toward fostering peace, the World Peace Sanctuary at 26 Benton Road in Wassaic has been treasured by residents and visitors alike since it opened in 2001.

When those living within 500 feet of the sanctuary received a letter from the Amenia Planning Board about a March 24 public hearing regarding the sanctuary’s application for a minor subdivision of its property (for the full story, go to www.tricornernews.com), many became concerned about what the subdivision could lead to. The peace sanctuary has since stated that it intends to sell 128 acres and hold onto only 26 acres, feeling that will be sufficient for their needs.

Neighbors have since banded together and formed Save the Sanctuary Wassaic (SSW); they’ve approached the sanctuary to consider alternatives to selling to the highest bidder.

“What we’re trying to do is to keep this really important natural resource available to the public as a green space,” said Patricia McGrath, a Wassaic resident and founder of SSW. “The sanctuary’s encouraged community events there, encouraged community access, and so we would really miss it if it were gone or changed.”

As former chair of Amenia’s Conservation Advisory Committee (CAC), Tonia Shoumatoff said when the sanctuary acquired the land in 1988, it was considered as holy as Mount Fuji in Japan. Masahisa Goi is the late founder of the World Peace Sanctuary; he’s from Japan, home to the sanctuary’s original site and creator its well-known message, “May Peace Prevail on Earth.”

From its wetlands, aquifers and forest land to the timber rattlesnakes, bog turtles and other endangered and protected species found at the Wassaic sanctuary, McGrath emphasized the value of preserving the land as “a wealth of natural resources in a large space, which she said “offers us the chance to walk through nature, to feel connected to something larger than our current troubles.

When McGrath learned of the subdivision application, she said she was heartbroken, though hopeful things might change.

Like McGrath, Shoumatoff  said she was disappointed to hear the news from the town and not the sanctuary’s parent society in Japan and San Francisco, which may be in charge of making the final decision as to the sanctuary’s future.

SSW has eight members hoping to preserve the sanctuary site; McGrath formed the group to provide the sanctuary options so it won’t have to sell to a potential developer who could ultimately put up a large housing development. Aside from reaching out to land conservancy organizations like Dutchess Land Conservancy (DLC), SSW has made other suggestions.

If it’s too costly to maintain the property, the group has offered to fundraise to cover expenses; SSW members also offered to volunteer and personally help provide maintenance.

“We’ve tried to get them to talk to us about what it is that they need because we will do whatever they need to help meet that need so they don’t have to sell the property and preferably not even have to subdivide it,” McGrath said. “Until we know what we need to do, we can’t do it.”

Meanwhile, McGrath has sought legal counsel to determine how to best protect her home — directly across from the sanctuary’s entrance — from any potential issues that might arise from any development down the road. Water run-off is a special concern as it has been an issue in the past, flooding nearby homes.

“That would be, in my opinion as the former CAC chair and the former watershed director for the area, a tragedy,” Shoumatoff said, “because not only is that land sacred land, especially in these difficult times of COVID-19, people walk every day. We need open space where people can go to find solace and reflect and find peace.”

Though she was unable to comment on the sanctuary property specifically, DLC President Becky Thornton said DLC is always happy to talk with landowners about conservation options.

“It’s not even subdivided,” she said. “That’s what’s important here, it hasn’t even been subdivided,” though she acknowledged “it’s clear we are pursuing a subdivision,” and “once that’s obtained and authorized, we will be putting up… 128 acres for sale.”

Whether the peace sanctuary would consider putting its land into conservation, Robustelli said that she had no comment, as “we are not in a position to make that decision.”