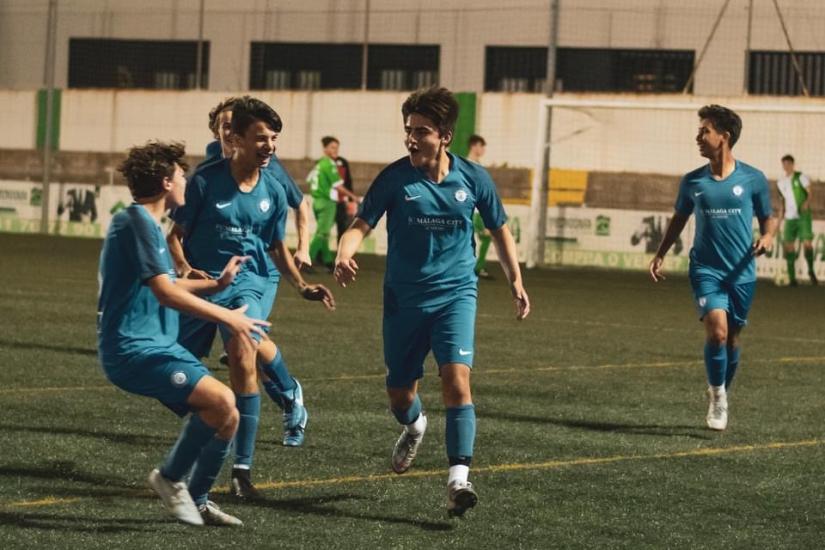 Players from the FC Malaga City New York team, otherwise known as the FC Malaga Wolves, including, from left, Gerard Rivadeneira, Jimmy Guaman and Marco Mazzarelli, were excited to train in Malaga, Spain, with the soccer academy this winter. Photo submitted

May 12, 2021
By
Whitney Joseph
editor@millertonnews.com

WASSAIC — Soccer has always been a part of Wassaic resident John Forbes’ life. He played the sport as a child growing up in nearby Brewster, so well, in fact, that he earned a partial scholarship to Quinnipiac University in Hamden, Conn., where he was the team captain.

It’s in the blood

Although he played other sports, soccer always had a special place in his heart. So when he and his wife, Amanda — who also loves the game and similarly played while in college — saw their son, Jack, had a natural affinity for the sport, they couldn’t help but nurture Jack’s passion and ability.

Those parental instincts have led Forbes to not only groom Jack, now 16, to pursue soccer as a student athlete, but also for Forbes to create FC Malaga City New York, a forward-thinking soccer academy in Salt Point modeled after an international soccer academy in Spain that’s training the top young athletes for professional competition.

“Basically, we’ve always been involved with soccer with Jack,” said his dad, who explained that five years ago he and his wife decided to move their son from his former school in the North East (Webutuck) Central School District in Amenia to South Kent School in Connecticut, which offers more competitive athletics and a highly regarded soccer program.

“I think it will be a cool new experience,” said Jack. “Obviously, I hope to learn at school, but I also hope to learn how to multi-task and how to bounce back and forth between soccer and school.”

“Jack’s really passionate, and the group we had didn’t have the same passion,” explained his father about both the Webutuck team and Jack’s former town soccer team. “It felt like it was holding him back, so I starting looking for other opportunities, in doing so I started other relationships, one with Colin McComb.”

McComb lives in nearby Union Vale, just outside of Millbrook. His son, Declan, also had dreams of playing professionally, was working with other soccer clubs, including one in Beekman with players from the well respected Arlington Central School District. Forbes said McComb was so serious about getting his son the proper training that he took him to Europe, where he met George Jermy, owner of FC Malaga City Academy in Spain. Jermy “recruits kids from all over the world to train for 10 months out of the year and play all over Europe; they’re affiliated with a professional team in Spain and play in the fifth division,” said Forbes.

At 14, Declan played soccer in Spain for nearly a year, while continuing his education online. Forbes said he and McComb “built a relationship with the club over there and decided to do something similar with a club here in the U.S.”

Hence, Forbes and McComb created FC Malaga City New York, which is affiliated with the club in Spain, but according to Forbes, is an entirely separate entity. It’s part of the USL franchise, of which there are about 80 to 100 teams in the U.S. The school is based on the Spanish academy’s model. It’s geared toward students in middle and high school, also offering a post-graduate year for advanced players.

Online education, on the field experience

“The kids practice in a professional atmosphere and get an online education,” said Forbes, who is the academy’s CFO and USL general manager, adding there are currently 24 students enrolled in Salt Point academy, which costs $22,000 a year to attend, which includes a three-month stay in Spain to train with world-class soccer players each year. There are some scholarships available and other financial aid programs are being explored at this time. “They do core curriculum classes everyday, which are prerecorded; they do the lessons at their own pace, which are supplemented with one full-time degree teacher and one assistant teacher.”

“It’s amazing, honestly,” said 15-year-old Diego Abad of Millerton, who is about to wrap up his first year at the academy after transferring from Webutuck High School, where he played soccer but said the program just wasn’t serious enough. It’s certainly serious at the academy, though. “I wasn’t expecting every practice to be so intense and everybody to get along as well as we do. And I think it’s pretty cool with academics, because with the video you can rewind if you missed something or need help, but it’s also not like a normal classroom, you don’t have to wait for someone, you’re on your own… I think it’s more suited for the individual, and there are so many classes you can take. I’m taking physics, algebra 2, English, Spanish and modern world history.”

Not only is the curriculum interesting, the students get to spend a couple of hours on a brand new state-of-the-art 120-yard by 70-yard regulation FIFA-sized soccer field with artificial turf, training every morning before classes.

Forbes, an accountant by trade who also spent years running his own construction company, described the roughly $1 million facility, which he built in about eight weeks with the help of volunteers — including his father and son and others invested in the academy who donated time, labor, equipment and materials — saving hundreds of thousands of dollars.

The soccer field is located at the Boy Scout Camp Nooteeming in Salt Point, just outside of Millbrook on the edge of Pleasant Valley. The 200-plus acre campus has been there for years, and when McComb heard it was about to be renovated, he approached the Boy Scouts to see if the club would be interested in working with the soccer academy. It said it would.

The agreement allows the Boy Scouts use of the soccer field for free, and for FC Malaga City New York to use the Scouts’ locker rooms after practice and its buildings for classes. It can also hold games at the new field during the season, which just began last week with its first match on Friday evening, May 7.

Forbes said he’s hoping to draw between 500 to 1,000 fans to the semi-professional games, which he compared to minor league baseball.

“The soccer will be of the highest quality you’ll find in area,” he said. “It’s the best kids.”

After morning practice on the new field, students hit the showers and have breakfast together.

“We’re all constantly together,” said Diego, who said while “we all want a spot on the team and stuff like that, and play a physical game, after a hard challenge, we pat each other on the back.”

When asked what his hopes are after graduation, Diego responded without hesitation.

“Obviously I want to get into a pretty good college but I also want to play soccer,” he  said. “I don’t know yet completely, but going over to Europe and playing some more, too, would also be amazing.”

Diego just returned from a month-long trip to Spain, which he said was “probably the best experience of my life. You were responsible for yourself, there was nobody looking over your shoulder, and you could keep it that way as long as you were responsible. Sometimes keeping academics and playing on the field is hard,” he said.

But that’s exactly what he’s learning at the soccer academy, where he said his favorite thing about being there is “just being with everybody, and how competitive we are all with each other and yet we are such good friends at the same time.”

Diego’s mother, Lucy Abad, said the transformation in her son since attending FC Malaga City New York has been “amazing” to witness.

“He’s happy,” she said. “He wakes up; I used to try to drag him out of bed, school was always a fight. Now I just put my head in and say ‘wake up’ and he’s rushing to get ready. He’s a lot more talkative about his day. I think going to Spain and being responsible for himself, he definitely grew up a little bit. He’s more willing to help around the house and is more responsible.”

She added that “ever since Diego was little and started playing soccer, he would say what he wanted to be when he grew up was a soccer player,” and thanks to the academy, he’s now getting that opportunity.

For more information, go to www.fcmalagacity-ny.com.