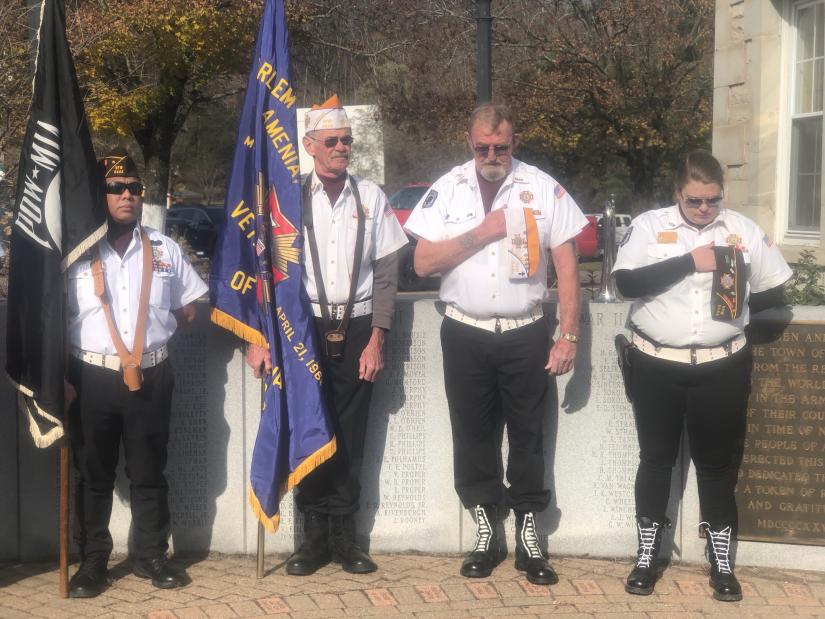 Standing at attention at Amenia’s Fountain Square War Memorial, local veterans bowed their head in respect of all who have served in the Armed Forces for their country. Photo by Robert Riemer

AMENIA — Amenia residents and representatives joined together in the center of town last Thursday morning, Nov. 11, to honor the courage and selflessness of the nation’s veterans at the town’s annual Veterans Day service.

Hosted by the VFW Post 5444 and the town of Amenia, the service began at 11 a.m. sharp at the Amenia Fountain Square War Memorial, located at 4958 Route 22. Following an introduction by VFW Cmdr. Maddison Fletcher, the crowd bowed its heads for the service’s opening prayer in commemoration of the veterans’ service and sacrifice.

Under the direction of the VFW, the region’s local Boy Scout troop marched over to the war memorial and, with the crowd standing at attention, laid down a wreath, according to Amenia resident Robert Riemer who attended the service.

Reverend Douglas Grandgeorge from The Smithfield Church delivered the closing prayer and residents were invited by Fletcher to stop by the VFW Post for refreshments.