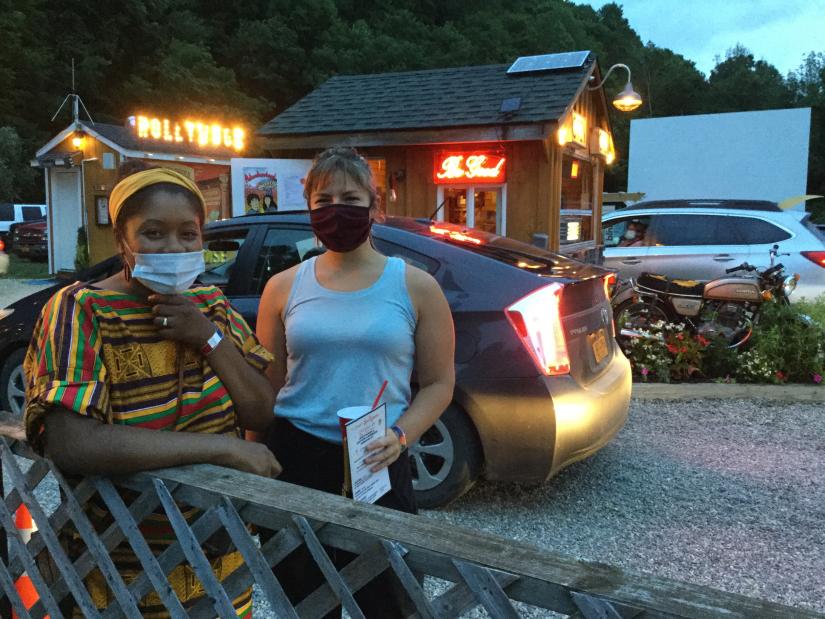 From left, Abigail Herace and Liz Burroughs spent a night on the town at a socially distanced block party held at the Four Brothers Drive-In Theatre on Thursday, July 16. Photo by Kaitlin Lyle

AMENIA — Teaming up with the Boondocks Film Society, the Four Brothers Drive-In Theatre invited spectators to a socially distanced block party featuring a screening of the film, “Do The Right Thing,” on Thursday, July 16, an experience that united the community while drawing parallels between the film and today’s racial tensions.

The party’s pre-film happy hour kicked off at 7:30 p.m. With the event having sold out days in advance, the drive-in drew a terrific crowd of spectators from the local area and beyond from all walks of life. As the hour leading up to the main event drew near, the field in front of the main screen was teeming with cars.

Donning face masks to stay protected from COVID-19, people spread out on the grass in groups, enjoying hot slices of pizza and cold cocktails while catching up with friends and keeping their distance. The event featured a film-inspired menu as an added touch of movie magic.

There was live music by local musician Li Sabas, followed by a live dance performance by Kingston performer Kamora Houser set to Public Enemy’s “Fight the Power” as a tribute to actor Rosie Perez’s dance performance in the film’s opening credits.

Though director Spike Lee’s film about a Brooklyn neighborhood forced to confront racial tensions premiered in 1989, many of those last week saw the film’s social relevance with today’s current events.

“I have my two sons down here to see something that’s still relevant to race relations now,” said Roger Crain, a resident of Lakeville, Conn. “The idea that they have no idea about this movie… If you know this movie, the race relations in the neighborhood scenario are very relevant to this time. I’m waiting to see my children’s reaction to whether it’s relevant to what’s going on now — one of the reasons I’ve brought them here is because these problems have been going on for quite a while.”

“I think it’s a very appropriate choice. It’s an old film, but the themes are still pertinent,” said Columbia County resident John Nafziger, “so I applaud the owners in making the selection and not selecting something more safe. We still haven’t moved the ball forward in any significant way.”

“That was part of the draw to be here, the whole topic,” said Doug Stuke. “I think it’s a very unique way for a community to come together around a very important topic that apparently never goes out of style, unfortunately.”

By 8:45 p.m., it was time for the show, and not even the falling raindrops could derail the crowd’s enthusiasm.

“We’re very happy to see it’s a sold-out show and we’re happy with the results,” said John Stefanopoulos, one of the theater’s owners, “so we’re looking forward to having more events like this. It’s just a fun, safe, responsible way to have people come out — we’re just happy to give them a place to escape to.”

All Boondocks Film Society proceeds were directed to benefit the Mid-Hudson NAACP.