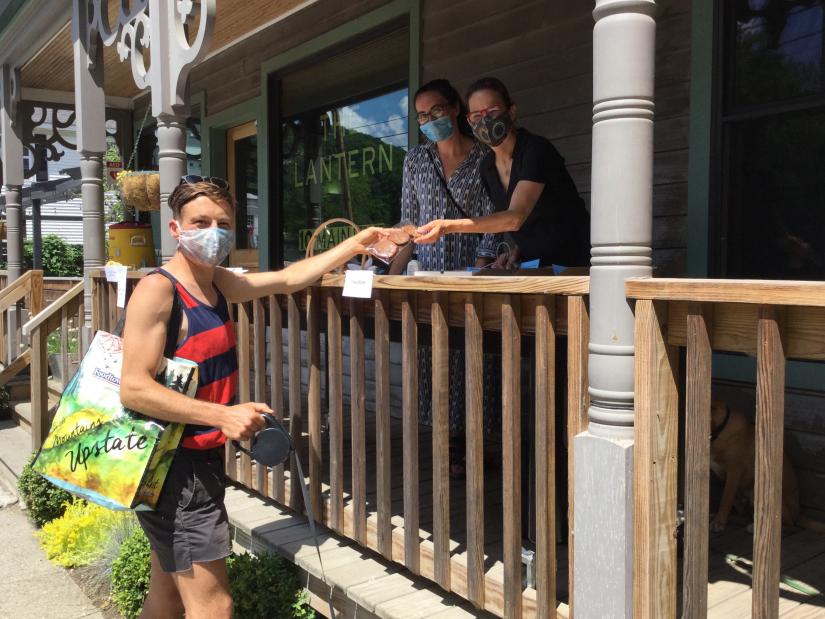 From left, Wassaic Project Director of Artistic Programming Will Hutnick treated himself to one of everything after browsing through the treats Victoria Hood and Dana Cowin were selling on the front porch of The Lantern. Photo by Kaitlin Lyle

WASSAIC — With the call for racial justice and equality growing stronger, people far and wide have sought to promote radical change these last few weeks, collaborating together on both an individual and community level in a united front for Black Lives Matter (BLM). When Paola Velez, the pastry chef of Kith/Kin in Washington, D.C., decided to launch a worldwide virtual bake sale called Bakers Against Racism, thousands of bakers, pastry chefs, cooks and other masters of the culinary arts around the globe responded with enthusiasm, eager to mobilize in an effort to advocate “radical change against systematic and structural racism,” according to the www.bakersagainstracism.com.

Standing underneath the shade of The Lantern’s front porch, a small, but talented menagerie of bakers, cooks and pastry chefs from the local region gathered to sell their homemade goods for the BLM cause and to raise awareness of the need for change. Among the sale’s participants, The Lantern made room on its front porch for Ariel Yotive from Troutbeck and Serge Madikians from Serevan, both in Amenia; Jessie Sheehan from Sharon, Conn.; and Johnny Dearth from The Lantern. All proceeds raised at the bake sale went toward organizations such as the National Association for the Advancement of Colored People (NAACP).

Taking the lead for bringing Bakers Against Racism to the local region was Amenia resident Dana Cowin, the former editor-in-chief of Food & Wine Magazine and host of the podcast, “Speaking Broadly.” Cowin said she placed the call out for chefs, cooks and bakers interested in participating just two weeks ago. Within the hour, she received a number of enthusiastic responses.

“The community of chefs, cooks and bakers in this area is extraordinary. There’s so much talent, so much enthusiasm and so much generosity,” Cowin marveled, praising everyone for showing up with contact lists for customers along with beautifully packaged treats.

“I’m happy to be able to raise money for this Black Lives Matter cause through this international bake sale,” she continued, voicing her appreciation of The Lantern providing the space for the sale.

In this age of social distancing, some might be curious as to how a “virtual” bake sale might work. The virtual aspect was through participants’ promotion of Bakers Against Racism on the world wide web, whether it was featured on their respective restaurants’ websites, social media accounts and ads; through their own online presence; or in connection with Bakers Against Racism. Starting June 15, the virtual pre-sale for Bakers Against Racism had participants buzzing around their kitchens to organize pre-orders of their food as well as extras to sell at the collective sale. By the day of the collective sale, many of the participants had already sold an astounding number of goods.

Sheehan, a cookbook writer and recipe developer from Sharon, remarked with pride her success in having sold out orders of her olive oil poundcake, chocolate chip cookies, chocolate zucchini bread and chocolate walnut marshmallow fudge.

“It feels important and amazing to be able to contribute in some tiny way, doing what it is I do, so I’m grateful for the opportunity to do something like this,” Sheehan said.

“Basically, it’s a way for us as restaurant hospitality people to show support in ways we know how,” said Erika DaSilva from The Lantern as she sold The Lantern’s house-made pizza dough for customers to take home along with orders of savory scones.

“It was great to get Troutbeck involved in such an incredible fundraiser for such a wonderful, international movement,” said Victoria Hood from Troutbeck as she helped Yotive sell everything bagels and mini chocolate babkas.

The bake sale drew a steady stream of customers throughout the afternoon. All while respecting social distancing rules, customers eyed an enticing assortment of goods on display, from scones, bagels, blondies and babka to strawberry shortcake, ginger molasses cookies and Armenian spice walnut cake, knowing their purchases would contribute to a worthy cause. Seven months into her pregnancy, Pawling resident Agatha Jordan said she’s been unable to go to BLM protests. However, by supporting Bakers Against Racism, she could show her support for radical change.

“It’s really encouraging,” Jordan said as she watched customers buy baked goods, “and it’s a great way for me to participate.”

Bringing their goodies to the shade of neighboring trees, a small impromptu picnic formed across the street from The Lantern as neighbors and friends sat together to savor their treats with other like-minded individuals, pleased to support an evolving cause geared toward lasting change. The sale raised $3,500; Sheehan, meanwhile raised $1,000 on her own from her baked goods, specifically for the NAACP.