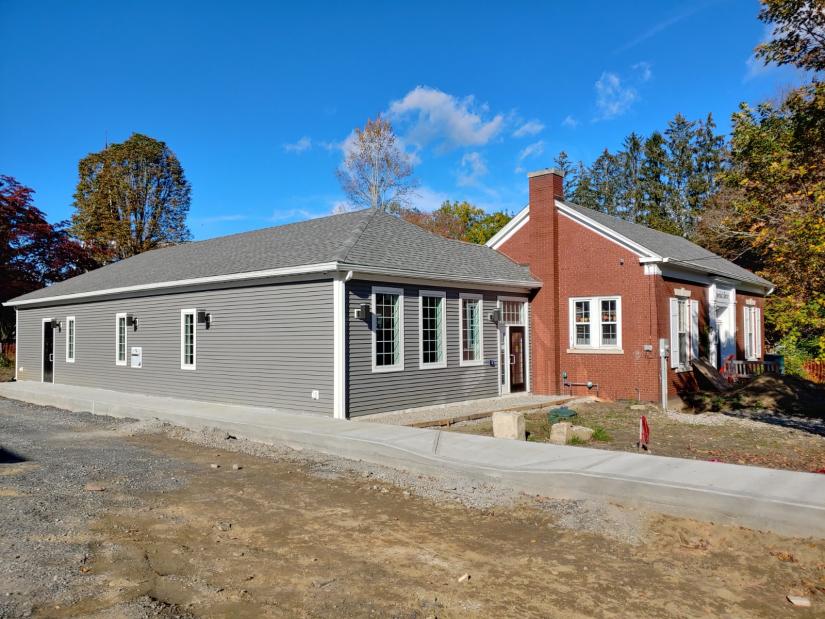 The new, modern 3,200-plus square foot expansion to the Amenia Free Library at 3309 Route 343 can be seen next to the original 880-square foot structure, built in 1938 as part of FDR’s WPA project to put people back to work during the Great Depression. The addition is nearly complete. Photo by Alan Gamble

AMENIA— When voters in the town of Amenia head to the polls on Tuesday, Nov. 2, the Amenia Free Library Board of Trustees will be holding its breath, as its members hope those voters will flip the metaphorical lever for Proposition No. 7.

Although electronic ballots no longer call for flipping levers when voting these days, the sentiment is just the same — the library is depending on the proposition passing, as it will mean the town will increase vital funding to support the library’s operation and maintenance.

That’s why the library projects what it will need to spend for the next three years to serve its nearly 1,000 patrons. This year, and for the past few years, however, it’s spent a tad more than usual — in the neighborhood of $1.18 million — thanks to its library renovation project that was roughly 27 years in the planning.

As Gamble explained in a letter to the editor that ran in the Oct. 14 edition of this newspaper, “The increase requested in Proposition No. 7… would result in a tax increase of $14.48 for an average residence assessed for $250,000 in Amenia… that’s just $1.21 per month for expanded library services, which our community deserves.”

The library expansion cost includes $900,000 for the construction itself and more than $100,000 for the engineering and architectural costs. Then there are the costs for furnishings and other finishing touches.

Amazingly in the day of the coronavirus pandemic and resulting construction delays and material increases, Gamble said there were few cost hikes, though there were a few hold ups in the project time line.

“We had change orders in the $47,000 range, an increase,” he said, for all the water that was found that had to be remediated. “The water table in Amenia is so high we had to put in some extra stone for drainage… The other thing that happened, when we did excavation for the parking lot that used to be the Amenia Theater, when it was torn down after a fire in 1974, they basically buried everything, so we found some chunks of concrete in excess of 10,000 pounds, which meant bringing in an excavator to remove it. It’s something you just don’t see going in to it.”

But Ducillo Construction kept the costs low and didn’t pass the unexpected expenses onto the library, said a thankful Gamble.

The old library was built in  1938 under the administration of President Franklin Delano Roosevelt (FDR) as a Works Progress Administration (WPA) project to help put people back to work during the Great Depression.

Gamble said it is unique in that it’s the same design as “probably eight or 10 libraries that look just the same in the state. So that’s kind of a unique feature… [but] our library is unique in the fact that it’s still operating and now under construction.”

Gamble tried to describe what the library will look like when patrons walk in the door once the renovations are complete. He said it will be modern looking, upon recommendation from the state historic preservation office, which gave a coveted $445,000 grant for the renovation.

“They want the old building to stand out,” he said. “If anybody asks why the new library looks modern and not like the old library, there was a $445,000 reason.”

Gamble said after walking through the vestibule, that the circulation desk is in front to the right, and immediately to the left is the children’s area. He said everything is defined “with colorful touches,” adding the new library is ADA compliant, will have “state of the art fire and security systems,” there will be “a modest increase in the number of volumes” and continued access to the Mid-Hudson Library System’s 2.5 million volumes, from which the library will now get deliveries three times weekly.

Town Supervisor Victoria Perotti said she is relishing the day the project is completed.

“The Amenia Free Library is the heart and soul of the town,” she said. “It not only provides books and education, computers and computer education, it provides multiple programs for children to instill in them a love of books and a love of reading, which I think is so important.”

Perotti added the library started to fundraise in 1994 in order to afford the expansion, rather than ever request funds from the town.

“The library has worked very hard to get donations to do the renovation without having to ask the taxpayers for anything,” she said, “and that far outweighs the amount they are asking for in the proposition.”

The Library Board of Trustees made a point to hire local laborers to do the work, whenever possible, including: architect Darlene Riemer of Amenia: Ducillo Construction of Amenia; Rennia Engineering Design of Dover; Electrician Jesse Loucks of Sharon, Conn.; O’Neil Plumbing of Wingdale; Excavator Tom Henessy of Clinton Corners; Cabinets by Kevin Dunlop and Marty Miller of Amenia; and Twin Brooks Gardens of Staatsburg did the to landscaping.

Library patrons and Amenia voters are invited to preview the newly expanded library on Saturday, Oct. 23, from 11 a.m. to 1 p.m. The Board of Trustees and Library Director Victoria Herow will on hand to provide tours and answer any questions visitors may have.

“It is going to be quite a celebration for the library and our community, to see our new and updated library, and what we can do and offer in the future,” said Herow, hoping residents will attend the open house. “Once the construction is finished, I’m very excited to be able to host programming on-site and have ample room for our patrons.”

This article has been updated to note that the construction project and proposition on the Nov. 2 ballot would cost $1.18 million and not $1.8 million. We regret the error.