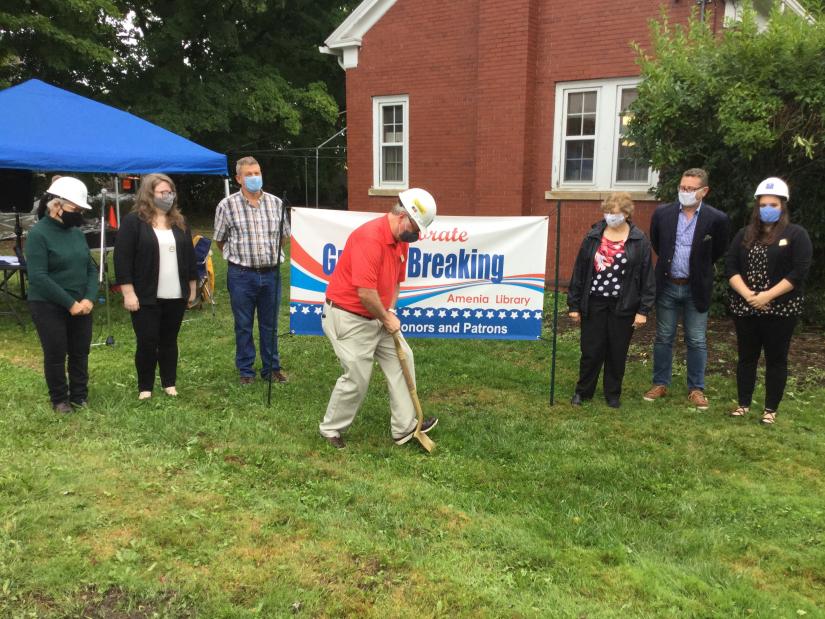 Amenia Free Library to expand after 20 years of planning, saving

AMENIA — Rain or shine, the Amenia Free Library was ready to break ground on its much-anticipated expansion with a ceremony attended by its Board of Trustees, volunteers, generous supporters and longtime patrons on Saturday morning, Aug. 29.

As the library began saving for the expansion in 1994 and planning around 2000, the groundbreaking represented an event 20-plus years in the making.

“I’m just excited that we finally were able to have our groundbreaking,” said Amenia Free Library Director Victoria Herow days before the main event. “I’m very excited to look toward the future and what the library can do for our town and the opportunities we’ll be able to hold here at the library.”

Between the various modifications that have been made to the plans over the years,the approvals the library has sought from local and state agencies and the land purchased to make way for the expansion, the goal behind these plans has remained constant: to provide space for the library’s materials, employees and patrons. With its current structure at 3309 Route 343 totaling a mere 880 square feet, the expansion entails the construction of a 68-foot long by 28-foot wide addition to the west side of the existing structure, adding a much-needed 1,904 square feet. In addition to providing appropriate storage for rare books and creating more flexibility for its computers and other technology, the expansion also includes adding a patio area at the rear of the property in a fenced area; installing new septic and heating systems; installing Americans with Disabilities Act (ADA) compliant restrooms; developing a new vestibule in the front of the library; and paving the parking lot and adding a parking space.

The library received the Planning Board’s approval for the project during the fall of 2018 and the community’s support during the past two decades. Working on the expansion project, Library Board of Trustees President Alan Gamble hired local architect Darlene Riemer from Darlene Riemer Architects and local engineer Rich Rennia of Rennia Engineering Design, with support from the other trustees.

Given the vast number of people who contributed to the project over 20 years, it came as no surprise that the groundbreaking was well-attended. Even as the skies opened for a gentle summer rainfall, community members, local leaders and library associates alike remained undeterred at the 10 a.m. ceremony. Design plans were spread out on a table underneath a small tent for people to examine, and large orange cones were set up to indicate where the construction would take place.

“It’s very exciting,” Susan McBrien, a longtime volunteer, agreed. “It’s really just an exciting day — we’re going to have a larger library with more books. It shows a lot of dedication to the library.”

As he thanked everyone for attending, Gamble said the expansion marks a new era for community service for the library. He expressed his heartfelt gratitude to those who helped pave the way for the project, including Mid-Hudson Library System Executive Director Rebekkah Smith Aldrich. Aldrich later congratulated the library and said the groundbreaking was made possible through everyone’s support, goodwill, donations and desire to be a community.

Under normal circumstances, Gamble remarked that the library would be celebrating the milestone with champagne, though he added that given the new normal of the COVID-19 pandemic that called for everyone present to don face masks, they’ll have to wait to enjoy the bubbly at the grand opening nine months down the road.

Representing New York State Assemblymember Didi Barrett (D-106), who was unable to attend, Matthew Hartzog presented the library with a citation in recognition of its service to the community and as a place for patrons to read, listen and explore for more than 80 years.

“The Amenia library is the heart and soul of the town of Amenia,” added town Supervisor Victoria Perotti. “It has provided so much to so many… We are so thrilled today that the library has reached a point in its expansion.”

Stepping up to the microphone, architect Darlene Riemer shared her thoughts on how much Amenia has changed over time and her enthusiasm to be a part of its and the library’s future.

Former librarian Devine then spoke of the many years she helped plan for the expansion.

“I looked forward to this for so long — this library means so much to me,” said Devine. “With everybody’s help — the volunteers, the people that come here — all of you made it possible. This is a dream come true not just for me, but for the town of Amenia.”

At long last, Gamble plunged a golden shovel into the ground and lifted up a pile of grass and soil, and the audience broke into applause.

Apologizing for any inconvenience the impending construction might pose over the next nine months, he announced that the library will remain open throughout construction, after which time its materials will be moved into the new building and the existing structure will be closed to make way for its renovation.