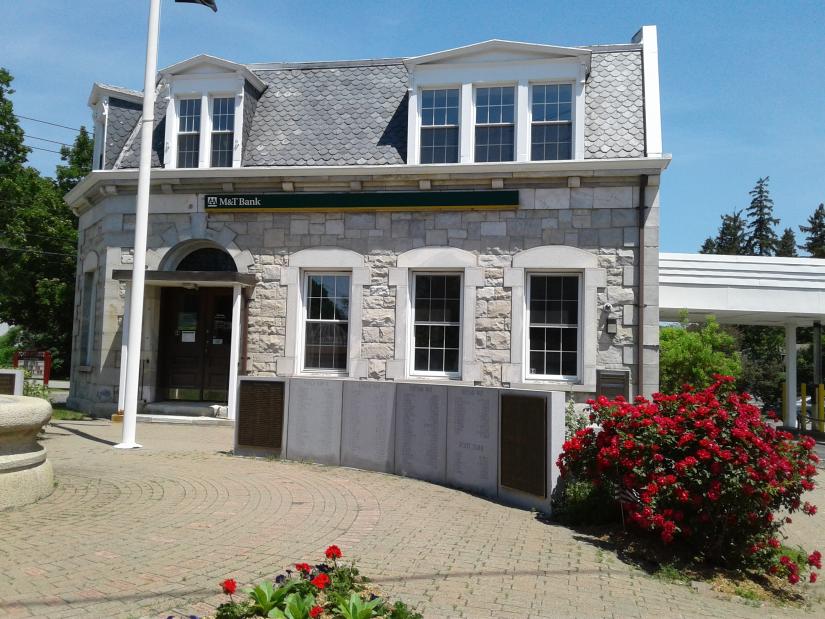 Located at 4958 Route 22 in Amenia, the Amenia branch of M&T Bank will officially be closing its doors after 27 years in business on Thursday, June 10. Photo by Kaitlin Lyle

AMENIA — After a successful 27-year-long run, the Amenia branch of M&T Bank at the intersection of routes 22, 44 and 343, at the town’s iconic Fountain Square, will be closing its doors, on Thursday, June 10.

“It’s disappointing that we’re losing a foundation,” town Supervisor Victoria Perotti said, “… especially one that has been in the center of town and walkable for most people.”

Perotti said residents will have to drive or find other means to get to the only other bank in town, the Bank of Millbrook at 5086 Route 22 in the Freshtown Plaza. Others may have to consider online banking.

She also spoke of the rich historical significance of the circa-1865 stone building where the M&T Bank branch has been located for almost three decades.

While the town wasn’t told any of the particulars of what is happening with the property, Perotti said Amenia is “trying, hoping, that someday another bank or credit union will come to the building to help the taxpayers.”

While M&T Bank began operating its Amenia branch in 1994, the story behind the building can be traced all the way back to 1800s, when Thomas Harris, Gail Borden and DeSault Guernsey joined together to found the First National Bank of Amenia in 1864, according to Betsy Strauss of the Amenia Historical Society.

Going further back in time, Strauss said the first bank in Amenia was actually in Leedsville, when it was owned and operated by storekeeper Joseph D. Hunt between 1820 and 1850.

In 1850, Strauss said Hiram Vail, steward of the Amenia Seminary, “opened a banking business with the Dutchess County Bank, Amenia.” That bank continued operations until 1863, a year before Harris, Borden and DeSaul collaborated on the First National Bank of Amenia.

Adding on to the bank’s history, Strauss mentioned that a branch bank of First National Bank Amenia was built at the Ames Plaza (now the Freshtown Plaza) in 1977, and the Amenia bank merged with the First National Bank of Downesville, N.Y., in 1985.

By 2000, M&T Bank moved into the historic building it continued to operate at five days a week up until recently.

Branch customers were notified of the impending closure on Feb. 23, allowing them ample time to plan ahead. M&T Bank is based out of Buffalo.

“Since I’ve been here, we’ve been using M&T,” said Susan Whalen, manager of the clothing store Label Shopper, located in the Freshtown Plaza, “and I’ve been here for 13 years. They were very good to me.”

Up until Monday, June 7, Whalen said Label Shopper would continue doing business at M&T Bank. That’s the day it switched its business over to Bank of Millbrook.

“We continually optimize our branch network to meet evolving customer needs, identifying locations where we need to locate a new branch or ATM, where we should invest in expanding or remodeling a branch location and where we have branches that are no longer positioned to effectively and efficiently serve our customers. In those situations, we often look to consolidate offices — not only to improve our efficiency, but also to ensure we’re best positioned to continue to serve customers for the long-term.”

Customers who banked the Amenia M&T branch can now bank at the nearby Dover branch at 3085 Route 22 or at any other M&T branch or ATM through M&T’s Telephone Banking Center, which can be reached at 1-800-724-2440,  www.mtb.com or through M&T’s Apple and Android mobile apps.

Though M&T’s employees were unable to comment on the Amenia branch’s closure, a final count had three workers at the branch at the time of its closing.