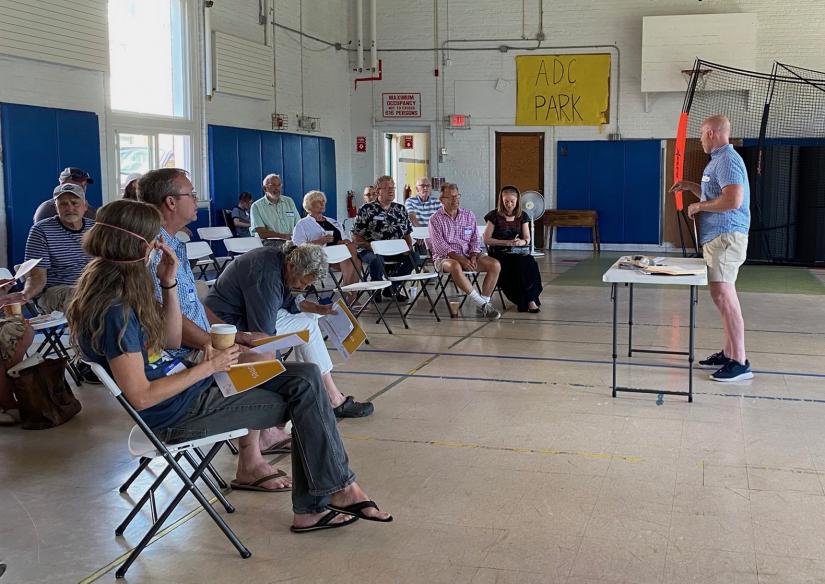 The need for affordable housing drew residents to a forum called by the Amenia Housing Board and led by Housing Board Chairman Charlie Miller, right, on Saturday, July 30, at the Town Hall. Photo by Leila Hawken

AMENIA — During a public forum about the dearth of affordable housing possibilities, both to purchase and to rent, and the benefits to community life if a wider range of housing options flourish, about 35 residents gathered to hear a report by the Amenia Housing Board (AHB). It was mainly a time for sharing ideas and finding common ground. Residents gathered in the Town Hall gym on Saturday, July 30, for an informal discussion that proved to be lively, cordial and productive.

Reinvigorated in 2019, the AHB engaged a planning consultant, joined the Tri-Town Coalition’s steering committee and worked with the Hudson River Housing group, with an early step a little more than a year ago of conducting a town-wide survey to assess Amenia’s housing situation and needs. The town housing code was reviewed as part of that work.

Community involvement is key to the work of the AHB, Miller said, indicating that many more forums are being planned to share the process with residents and call upon them to contribute their expertise and remain engaged.

Survey results showed that about one-third of Amenia residents are paying more than 30% of their gross income on housing costs, Miller said. One resident reminded the board that affordable housing for senior residents should be addressed.

With the increase in housing costs for buyers and renters, Blackman said, businesses are having a hard time attracting employees to fill their job openings.

“This town is made for working people,” Blackman continued, noting that some residents are working two or three jobs to make ends meet.

“We need a diverse population,” Blackman said, adding that such diversity brings children to the schools and volunteers to its fire departments as well as other organizations that the town relies upon.

“We need people engaged in their community,” Blackman added.

Residents spoke of options including accessory apartments within existing homes and initiating programs with banks to assist young families with housing, or enacting provisions for tax abatements.

AHB member Jeff Barnett-Winsby stressed the importance of communication, asking those present to engage with others and involve them in the discussions about meeting the town’s housing needs.

“We are soliciting ideas,” Barnett-Winsby said.

“We need you to show up at the next public hearing,” Miller agreed, directing his comment to the audience and indicating that plans call for postcards, flyers, emails and social media to engage residents on the affordable housing issue.

“The issues are still the same as they have been for the past 20 years,” he said. “You need a mix of people.”

Plans are now being drawn for a development on 16 acres of land north of the Town Hall and on the west side of Route 22. The parcel has been purchased by Hudson River Housing. Hoping it will be seen as a model project, 14 units are being planned for the site. Each home would be a duplex with the homeowner living in one half and renting the other half to assist with the mortgage.

“This will only chip away at the problem,” explained Josh Frankel of the AHB. “We have a great opportunity coming up in the short term, but if we do a good job on the 14 units, it will make the next steps easier.”

Frankel noted that the project is still being designed and that the application needs to be considered and approved by the town Planning Board.

The next step will be a meeting to be scheduled by Hudson River Housing to present the plans to the public. The AHB hopes the residents will attend the presentation to learn more details and weigh in with their thoughts about the proposed project.